As the city of Oxford continues to eye land further out in Lafayette County for annexation, city leaders are being met with obstacles on how much to require large landowners to meet current city ordinances dealing with tree removal and mitigation.

Before the Oxford Board of Aldermen voted on approving an amendment to the city’s Landscaping and Tree Preservation code during Tuesday’s regular board meeting, Mayor Pat Patterson brought up a concern shared by himself and Alderman John Morgan in regards to tree farmers, who are currently outside of city limits, and the kind of hardships they could encounter if annexed into the city. 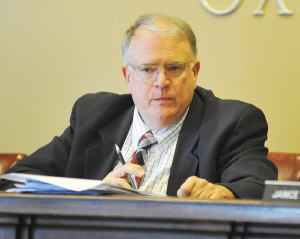 According to city code, on sites greater than 5 acres, replacement of heritage trees is done at a rate of one, 2-inch caliper tree per two inches of trees removed. Those developments that aren’t large enough to replant on site, can pay into the city’s Tree Escrow Account, which is used to plant trees in other parts of the city. The amount paid is based on the fair market value of materials and labor at the time of planting.

There is also a provision that allows landowners to clear the land to sell timber, but then they couldn’t develop it for three years.

A proposed change also states that any land annexed into the city has 12 months to comply with the ordinance.

City Attorney Pope Mallette said any land brought into the city through annexation, becomes the city’s duty to plan in the best interest of the city.

“If you all agree your landscaping and tree mitigation ordinances improves the quality of life in Oxford, then you stick by them,” he said. “But there is middle ground somewhere … You can change your ordinances to accommodate these situations.”

Mallette suggested having the ordinance review committee take a closer look at the landscaping ordinance and tree mitigation regulations and see if there are ways to amend them to accommodate land used for timber and tree farming.

Mallette said the city looking at any large annexation is six to 12 months away and there is time for planners to work on the codes.

Patterson expressed some urgency to the situation.

“They could be afraid of annexation and go in now and clear-cut,” he said.

City Planner Judy Daniel said there are ways to reach a middle ground.

“We can look at modifications to the ordinance that proposes ways to address annexation,” she said.

In the meantime, the aldermen voted to accept the recommended changes to the current landscaping ordinance that include expanding the requirements to include subdivisions as well as site plans and would be applicable and required for all sites over 12,000-square feet, where currently, only those developing more than 1 acre had to comply with the ordinance.

Developers would be required to have the landscaping plan done by a licensed landscape designer, landscape architect or certified arborist.

Currently, landowners or developers pay a surety bond of $1 per square foot of required landscaping. The new ordinance ups the amount to $3 per square foot and requires the payment before a temporary certificate of occupancy is requested.

The new Landscaping and Tree Preservation Ordinances also expands the scope of regulations related to the removal of trees without prior authorization. It clarifies that a Tree Survey is almost always required before trees are removed, and that developments outside of the city, but seeking water and/or sewer services from the city, must comply with the ordinance and that land annexed into the city will have 12 months to comply after annexation.

The entire ordinance can be reviewed online at oxfordms.net or by calling the Planning Department at 662-232-2305.