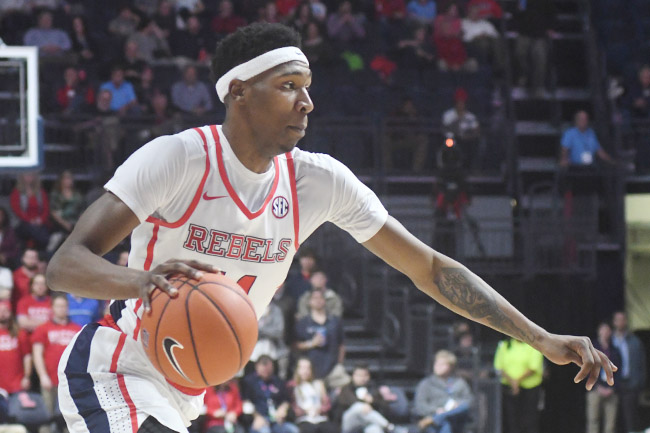 Ole Miss' Rasheed Brooks (14) drives towards the goal against Tennessee at The Pavilion at Ole Miss in Oxford, Miss. on Tuesday, January 17, 2017. Brooks was released from Baptist Memorial Hospital on Thursday. (Bruce Newman, Oxford Eagle via AP)

Some of Ole Miss’ players and coaches looked on in frightened confusion when Rasheed Brooks’ twitching body collapsed to the floor early in the second half of Tuesday’s game against Tennessee.

Terence Davis knew exactly what he was witnessing.

Brooks’ tongue didn’t go back that far, but the senior guard was rushed to Baptist Memorial Hospital in Oxford. Word got back to the team later in the game that Brooks was conscious and in stable condition.

After rallying from a 13-point deficit for an 80-69 win, players and coaches visited Brooks at the hospital, where he stayed to undergo further tests. He was released from the hospital Thursday night, a school spokesman said.

With that assurance, the Rebels are turning their attention to the rest of a Southeastern Conference schedule that’s starting to lighten up some. Ole Miss’ comeback against Tennessee snapped a two-game losing streak, but the Rebels (11-7, 2-4 SEC) are still in the bottom half of the league standings having already played four of the SEC’s top five teams.

If Ole Miss has ideas of working its way back into any sort of postseason picture, it will have to start this weekend.

The Rebels hit the road Saturday for a 2:30 p.m. tip at Missouri (5-12, 0-5), which owns the worst record of all Power Five teams. Ole Miss will then begin a three-game homestand Wednesday against a Texas A&M team that’s stumbled to a 1-5 start in the league with mediocre guard play, providing the Rebels a prime opportunity to get to .500 in the conference before No. 6 Baylor visits The Pavilion on Jan. 28.

“We’ve got to win them,” Davis said. “That’s what we all have agreed on as a team that these are must-win games. We’ve got to get these two.”

Depth will again be a concern should the Rebels be without Brooks and leading scorer Deandre Burnett, who’s still day to day after missing the last two games with a high ankle sprain. Already down a pair of frontcourt players with Karlis Silins’ ACL injury and Nate Morris’ dismissal, Ole Miss finished Tuesday’s game with seven available scholarship players.

Davis said the low numbers will force the Rebels to pick and choose their spots to be aggressive defensively in order to avoid foul trouble.

“We are who we are right now,” Ole Miss coach Andy Kennedy said. “Our hope is that Dre (Burnett) is responding every day, and our hope is that he’ll be back with us sooner rather than later if he doesn’t have any setbacks.”