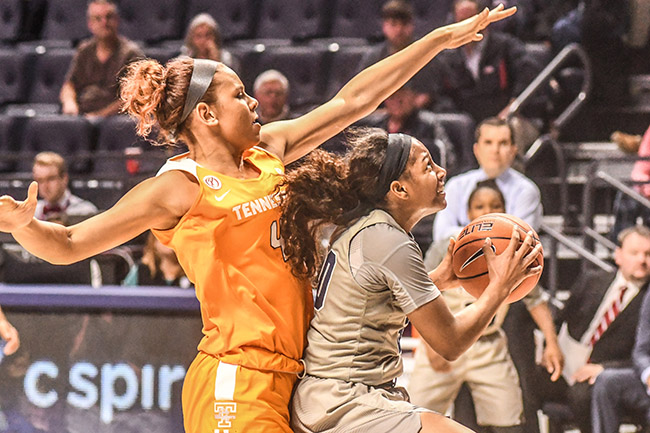 The rocky road for the Ole Mis women that is the beginning of their Southeastern Conference play is nearing its end, but first they have one more huge obstacle in their way.

After having to play No. 4 Mississippi State in Starkville on Monday night, the Rebels now head to Columbia, South Carolina to face the No. 5 Gamecocks tonight (6 p.m., SEC Network).

After getting blown out in The Hump a year ago by nearly 30 points, Ole Miss (13-5, 2-3 SEC) rallied from 23 points down but was unable to complete the comeback with a 73-62 loss to the undefeated Bulldogs. Even though it was their fifth loss on the season, head coach Matt Insell felt his team proved to everyone outside of his program that they are trending in the right direction. It came after rallying from 13 points down and knocking off Tennessee for the first time in 21 years last Thursday.

“We found a way to keep fighting in a hostile environment and I don’t believe in moral victories at all, but I came down here with a good basketball team and I’m leaving with a good team,” Insell said during his postgame press conference Monday.

Unfortunately for Ole Miss, there is no easy rebound game following a top-5 opponent. All that awaits them is another top-5 opponent in South Carolina (15-1, 5-0). Still searching for their first road win of the season, there are a lot of other negative streaks the Rebels could end if they found a way to pull out a win inside Colonial Life Arena. It would be the first victory over the Gamecocks since 2010 and would also snap an 11-game SEC road losing streak dating back two seasons.

Much like last year against Mississippi State, Ole Miss will have to exorcise another road blowout loss to the Gamecocks, having lost to them, 81-62, on Jan. 28 of last year. South Carolina comes into tonight’s contest having lost only one non-conference game and holding serve in conference play. Their most recent win was an 84-61 win over LSU on Sunday.

The Rebels’ defense will be tested as the Gamecocks have a quartet of players scoring in double figures on a near nightly basis. A’ja Wilson leads with 16.9 points while Alaina Coates follows with 14.7. Teammates Allisha Gray and Kaela Davis round out the foursome with 13.3 and 13.1 points per game, respectively.

Tonight’s game finishes a stretch of four out of the first six SEC games being played on the road for Ole Miss, including getting Mississippi State and South Carolina back-to-back in a four-day stretch.

The Rebels will return home to host Alabama on Sunday at 2 p.m.