Kellyeanne Conway started an Internet meme sensation today with her revolutionary wear at the Inauguration 2017. This Twitter user compares Conway's outfit to that of the Hamilton cast. (twitter)

Donald Trump senior adviser Kellyanne Conway has stolen the show at the Inauguration 2017 with her “revolution” attire.

The Internet has been buzzing all day since, with meme’s of Kellyanne Conway’s inauguration outfit.

Conway wore a military-style wool coat by Gucci of red, white and blue, with two rows of cat-head buttons and a matching red cloche hat. She described her look as “Trump revolutionary wear.”

One Twitter user posted a meme of Conway’s outfit beside a picture of someone from the cast of the popular Broadway musical — noting the similar styles. 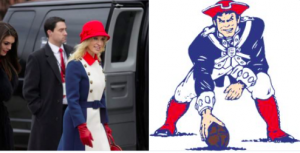