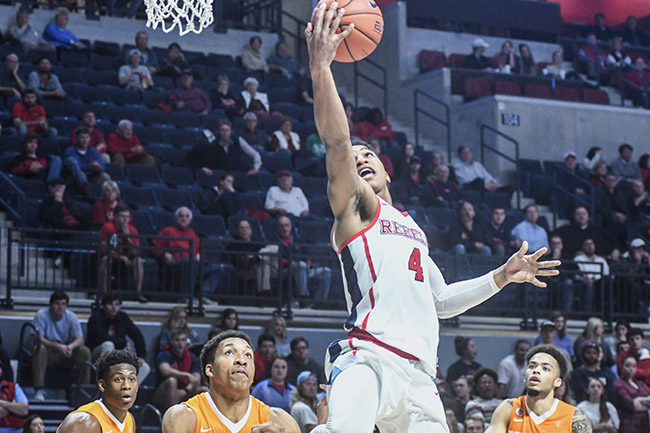 It may be next season until Breein Tyree is fully healthy. For now, he’s healthy enough.

Ole Miss will take it.

Tyree, the Rebels’ freshman point guard, had the best game of his young collegiate career Tuesday in Ole Miss’ come-from-behind win over Tennessee. Tyree posted season-highs in points (15) and assists (6) in helping the Rebels avoid their first three-game losing streak of the season.

Less than a year removed from reconstructive ACL surgery during his senior year in high school, Tyree looked more like the bouncy, quick-twitched prospect that headlined Ole Miss’ latest recruiting class on a night when his production was a necessity while again filling in for leading scorer Deandre Burnett, who missed his second straight game with a high ankle sprain.

“He was really explosive,” Ole Miss coach Andy Kennedy said. “I think he’s getting more and more confident. It’s difficult for any freshman to be put in those circumstances, most especially one that’s coming off an ACL and literally had no basketball in June, July, August or September, very little in October, and he was not full go until November. It’s hard.”

Kennedy has likened Tyree’s athleticism to that of NBA star Russell Westbrook when he’s full speed, but the 6-foot-2, 192-pound Tyree has only been able to offer glimpses of it. Tyree has overtaken Donte Fitzpatrick-Dorsey as the backup point guard when Burnett is healthy but entered Tuesday’s game shooting just 34.7 percent from the field, lacking his usual burst to shake free of defenders for open looks or finish at the basket if he got by them.

His 11 points against Middle Tennessee State in a blowout loss is his only other double-figure output this season while his previous best of four assists came in a romp over South Alabama last month. Starting for Burnett against South Carolina on Saturday, Tyree shot just 2 of 9 with three assists and a turnover, though teammates noticed a different pace to Tyree’s game that got him to the rim more frequently.

“I think he had like two or three contested layups that were tough, but if he would’ve made them, they would’ve been great plays,” fellow guard Cullen Neal said. “He attacks the rim, and he’s just got to keep attacking.”

He did it better than he has all season in crunch time against Tennessee.

Tyree consistently knifed through the Volunteers’ defense to put up a shot from close range, draw contact or find an open teammate. He scored 11 of his points in the second half as Ole Miss rallied from a 13-point deficit with 15 minutes left and sank four of his seven free throws in the final 2:28 to help the Rebels ice it.

“I thought he controlled the whole game,” Tennessee coach Rick Barnes said. “He was getting at the rim and doing what he wanted to do.”

Tyree may be coming on at just the right time with the Rebels running out of viable options. Burnett could be held out again Saturday at Missouri while Rasheed Brooks’ status is unclear after the senior suffered a seizure early in the second half of Tuesday’s game.

Now more than at any other point this season, Kennedy is confident in Tyree’s ability to produce.

“Strong at the rim and finished through contact,” Kennedy said. “Thought he really, really grew up (Tuesday), which I think is a great indication of his future moving forward.”