Mississippi tornado survivor: ‘Is God mad at us?’ 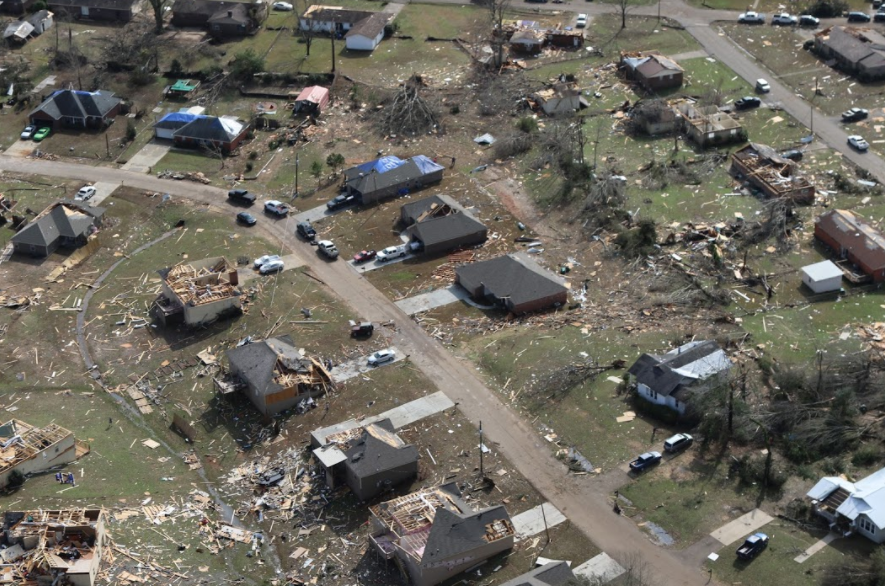 This photo of the Hattiesburg tornado 2017 is courtesy of Pfc. Christopher Shannon of Jackson's 102d Public Affairs Detachment.

HATTIESBURG, Miss. (AP) — Rain was pouring down in the pre-dawn darkness, and the wind was picking up as Darryl McMorris ran for his daughters’ bedroom. The windows started blowing out as he dove on top of his girls, grabbing one under each arm as he tried to protect them.

“As soon as I did that it seemed like we were flying in the air,” he recalled Saturday. Walls began to collapse and the house began to blow apart as his daughters screamed. But he held on tight.

When the tornado finished ripping its way through their Hattiesburg home he and the two girls were under a wall. Their house appears to be a total loss, bedding tossed 50 feet into a tree and their oldest daughter asking, “Is God mad at us?” But they’re alive.

“I don’t see how we survived this,” said his fiancee Shanise.

Across the tornado’s devastating path, families were taking stock of the damage, hugging friends and neighbors, grieving over the remains of their homes and in many cases mourning those killed.

Authorities said four people died when the twister touched down around 3:35 a.m. Saturday. Shannon Hefferan, a meteorologist with the National Weather Service, says damage reports indicate it touched down in Lamar County before ripping into Forrest County and skirting just south of downtown Hattiesburg — the state’s fourth largest city.

Teams are out assessing the damage. Already they know that the tornado was accompanied by a deluge of rain — 3.42 inches over a six to seven hour period Saturday morning — Hefferan said.

And the bad weather isn’t over yet.

The weather service anticipates another round Saturday night. A tornado watch was already in effect until 9 p.m. in parts of southeastern Louisiana and southern Mississippi, warning that hail, gusting winds and tornadoes are possible.

Monica McCarty lost her father — Perkins — who died in the same trailer park where she and her boyfriend live and her son — Madison — who was apparently crushed to death while in bed at her mother’s house where he lived.

Standing amid the tornado’s carnage, McCarty wept as her boyfriend, Tackeem Molley, comforted her.

“They couldn’t get him out of the house. They said he was lying in the bed,” McCarty said of her son.

Molley said he and McCarty were in a trailer when the storm hit. Molley, whose bare foot was bandaged, said he climbed out through a hole in what had either been the trailer’s roof or wall.

“I had a little hole I could squeeze out of,” he said.

In the surrounding neighborhood, power company trucks ran up and down the streets and city backhoe plowed debris from the road. Dozens of homes were damaged.

Sheet metal was strewn everywhere. Trees turned into spindly sticks were lying across power lines. At least three nearby churches had sustained damage.

Mayor Johnny DuPree has signed an emergency declaration for the city, which reported “significant injuries” and structural damage.

“You’ve got so many buildings that are for all practical purposes totally destroyed,” said Andy Case, a disaster recovery specialist with the Department of Insurance.

At William Carey University, a Baptist institution south of downtown Hattiesburg, almost every building on campus suffered at least superficial damage. Many were heavily damaged. College officials closed the campus where 3,200 students study and 800 students live and are not sure when it will reopen.

Saturday afternoon parents and students streamed onto campus to remove belongings from damaged dorms with some students making their way over shattered glass or around fallen bricks to reach their room.

For students in their dorms when the tornado struck, it was terrifying. Tegan Sager, a freshman from Hermiston, Oregon, said she’d never been in a tornado before. She said bursts of lightening lit up the outside just before the tornado hit. She and 20 other students huddled in the first floor hallway of their dorm, cradling their heads in the hands.

“That’s when the panels from the roof were falling in,” she said. “Girls were screaming and a person next to me got cut on the leg.”

In many areas the roar of chain saws could be heard as people began cutting down trees, salvaging belongings and considering their next steps.

As the McMorris family gathered at a parking lot of a ruined gas station across the street from their house, they took stock of their losses and what had been saved.

“I lost everything but I’m just glad I didn’t lose my daughters,” McMorris said.