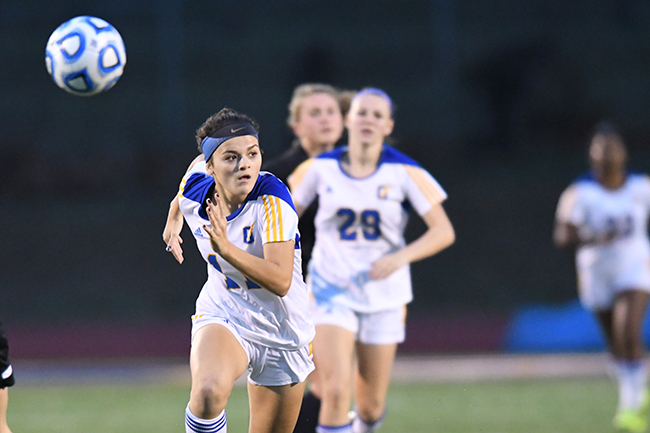 Oxford’s Morgan O’Connor (11) scored a school record 43 goals, shattering her previous of 27 in a season set last year. O’Connor and the rest of the Chargers look to defend their Class 5A state title as playoffs begin on Tuesday. (Bruce Newman)

Oxford soccer has two titles between both the girls and the boys programs. The most recent one came last February when the girls won their first ever. Nearly a year later, they have not tasted defeat. The Lady Chargers completed the regular season with a perfect record of 15-0, the first time an Oxford High soccer program went undefeated. They will now have to keep that pace up to make a truly history season as the MHSAA Class 5A state playoffs begin on Tuesday with Oxford hosting Center Hill before the boys’ game against Lewisburg.

The wins kept piling up for Oxford, but the zero on the right side of the column never became an elephant in the room for the team. Not until the final stretch of the regular season. Even then, it was merely discussed and not fretted about.

“The crazy thing was the first time we even mentioned it was (Jan. 11) during practice after the Grenada game,” Oxford girls head coach Hunter Crane said. “I told them, ‘We hadn’t said this all year, but y’all are undefeated.’ …I think mentally, we’re ok right now. This is a strong group.”

Perfection was not a goal Crane and his team was striving for as an achievable goal, though no coach or team want to lose, but with the team he has had this season, losing never really looked like an option. The Chargers scored 98 goals in just 15 games for an average of nearly seven goals a game, compared to only giving up four goals to their opponents all year. Some key wins on the season came against Tupelo by a score of 2-1 in the second game of the season, a 5-0 win over Starkville and an 8-2 win at Pearl.

Dynamic Duo
The offense and defensive numbers are staggering and can be attributed to two people. Actually they are sisters. Senior goal Bailey O’Connor and her sister Morgan O’Connor have been the key cogs to Oxford’s success. Yes, the other nine players on the field have also helped with the success, but the O’Connor sisters are the main threats. Bailey has allowed the four goals, but has saved over 43 shots and has six shutouts.

“(Bailey) gets a little action here and there,” Crane said laughing. “Then she gets kind of settled in and she’s like ‘hey, over here.’ It’s good and bad. We want her hyped up and focused the whole time, when our offense (scores a lot) she kind of loses focus. It’s just a double-edged sword.”

The freshman, Morgan, who had a breakout season last year by tying the school scoring record of 27 goals in a season, shattered that record this year with 43 goals in just her second season on the varsity squad.