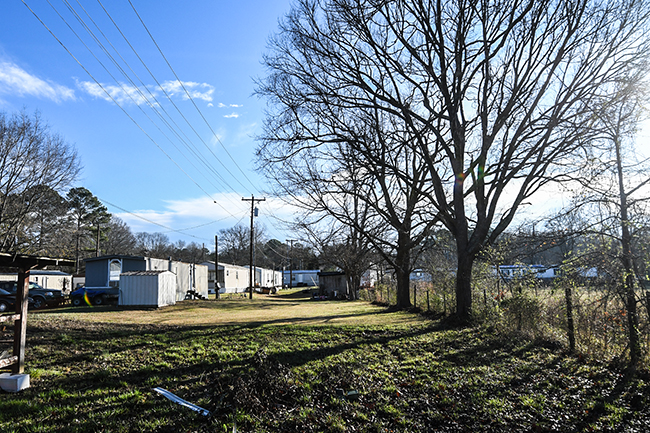 Bruce Newman A mobile home park in Water Valley has caused a stir in the community since a group of Oxford developers purchased it and plan to expand the complex on an additional 20 acres near downtown.

A conflict has developed in Water Valley between local residents there with four Oxford developers who want to build a large trailer park near the city’s Main Street.

The Oxford developers, including Hayden Alexander, Turner Barnes, Andrew Ross and Josh Matthews, have purchased a small existing trailer park in downtown Water Valley and an adjoining 20-acre tract of property in Yalobusha County with plans of providing affordable housing in the form of new trailers on that additional land.

The development has caught some in Water Valley, including leaders, off guard since the 20-acre tract is so near downtown. They feel a large trailer park with 100 or more new units over 20 acres would change the complexion of downtown Water Valley for years to come.

The development group feels differently, however.

“Our desire is to be an asset to the community by providing affordable housing,” the developers said, according to the North Mississippi Herald. “We also would want our project to be a place where everyone would want to live. Again, our goal is to create an affordable, yet safe and family-oriented community.”

To date, Oxford developers including Dick Marchbanks have invested in downtown commercial real estate and renovations of existing homes but nothing like this has come up before, said Water Valley Main Street Association Director Mickey Howley.

“This is the first bad taste in our mouth,” he said.

Howley said that trailer parks like this potential development “suck the value out of surrounding real estate.”

Water Valley has received national attention for its revitalized downtown in recent years and property values for commercial buildings and homes have been on the rise.

The four Oxford investors reportedly purchased the property in September of last year and formed Golden Wing, LLC, in December to develop the trailer park.

Water Valley has zoning laws but Yalobusha County does not. So the only thing slowing the potential development down at the moment is that the 20 acres the investors want to expand the trailer park on is in a flood plain.

To develop the 20 acres Golden Wing would have to get the property, which includes flood plain farmland that slopes to O’Tuck Creek, up to base flood elevation – an effort that could take thousands of dirt truck loads. Golden Wing has not set a timeline for the development.

“We are going to take our time and do this project the right way,” they told the North Mississippi Herald.

Two members of the Yalobusha County Board of Supervisors have also hinted that this development has shown that time for discussion about establishing some “minimum ordinance” for planning and zoning in the county may have come.

The issue may be addressed at a Monday meeting of the supervisors at the Coffeeville courthouse.

The conflict has taken a bit of Oxford vs. Water Valley tone in the media and on social media. For instance, headlines in this week’s North Mississippi Herald about the trailer park development plans include: “Golden Rule Applies to Oxonian investors,” and “Oxford Investors Plan to Expand Trailer Park.”

“This development might be legal but not necessarily right,” said Water Valley’s Blount Street resident Anne Burke in the North Mississippi Herald. “If our elected officials cannot or will not stop this we need to find some candidates who are better able to look out for our interests and not the interests of Oxford businessmen looking for a cash cow.”