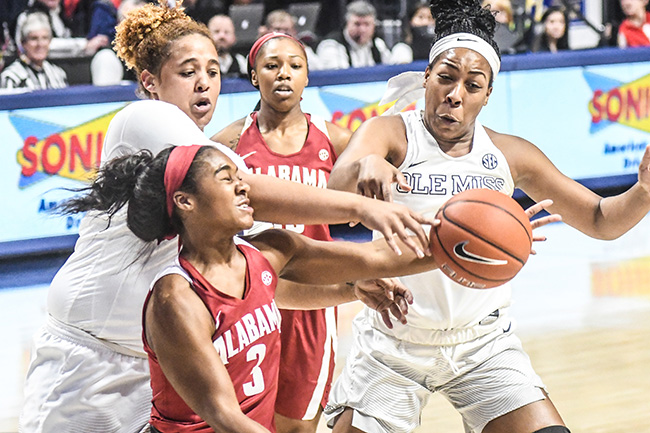 The road woes for the Ole Miss women’s team have made their way back to Oxford. For the first time all season, the Rebels lost inside the Pavilion as Alabama defeated them 65-57 on Sunday afternoon.

The loss sent Ole Miss’ home record to 12-1, keeping the Rebels from having one their best starts at home in 30 years, and was the third straight loss for the Rebels (13-7, 2-5 Southeastern Conference). The win halted a three-game skid for Alabama (15-5, 3-4), who completed the season sweep over Ole Miss.

“It’s not the result we wanted, but give credit to Alabama,” Ole Miss head coach Matt Insell said. “They made plays when they had to make plays. I’ve give them all the credit in the world. (Alabama head coach) Kristy (Curry’s) team was just a lot tougher than our team. We continued to miss layups at the rim. We continued to just have complete defensive weak-side, help-side cover downs that we work on every day. Those things beat you in a big game.”

It was sloppy play all around for both teams in the first half. Both teams combined for 26 turnovers with Ole Miss responsible for 12 of them. The careless play subsided for the Rebels in the second half, committing only seven. Offense was an issue as well, with Ole Miss shooting 28.6 percent (8-for-28). It was not much better for Alabama, who shot 36.4 percent but were able to take a 25-19 lead into halftime.

“They’re just throwing the ball to the other team,” Insell said of the recent turnover struggles. “I think they’re confused about we have a white jersey on and the other jersey had a red jersey on, or whatever it is. We get confused. …We just throw it to them for no reason. We can show them film after film after film. It just comes down to toughness and our toughness just isn’t very good.”

The offense picked up in the second half, starting with a 6-0 run by Ole Miss to begin the third quarter to tie the game at 25-25. Alabama responded and the see-saw battle continued the final 20 minutes with game being tied four times.

After taking their first lead of the game with 2:46 left in the third quarter at 41-39, the Rebels were able to stretch it out to a 48-44 with a chance for more but Erika Sisk missed a layup and Alabama ran down the court for a bucket and an and-1 for the five-point swing. From there, the Crimson Tide went on a 16-9 run to close the game out.

Alabama’s freshman point guard Jordan Lewis had a game-high 22 points, scoring 10 of them from the free throw line. The other 12 came from inside the paint and the perimeter. Hannah Cook scored 17, hitting four-of-five shots from three-point range.

After a quick stop at home, the Rebels hit the road once more as they travel to Lexington to take on Kentucky on Thursday (6 p.m. CT, SEC Network+).