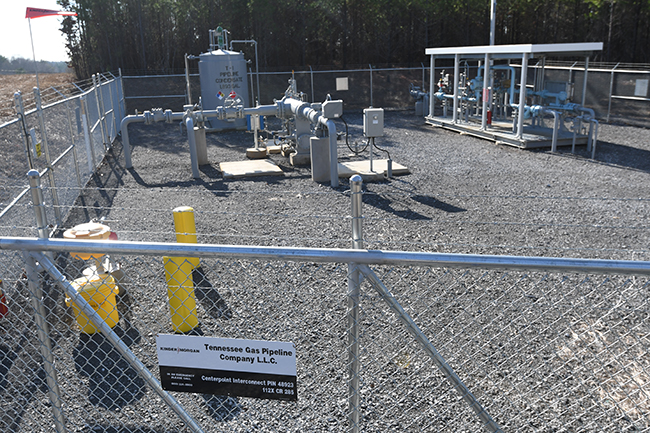 Bruce Newman A new natural gas substation that feeds into the Tennessee Gas Pipeline has been constructed on County Road 285 just off Highway 6 in the Denmark community as part of CenterPoint Energy’s proposed future expansion of natural gas into Lafayette County.

When he arrived in 2012 as the new boss of CenterPoint Energy in the area, Jody McDougal initially checked out the operation and quickly realized there was a potential problem. There is only one line feeding natural gas to approximately 12,000 customers in Lafayette and Yalobusha counties and it runs underneath Sardis Lake.

To provide another access for natural gas, CenterPoint has decided to run a pipeline from the east — generally down Highway 6 — feeding from the Tennessee Gas Pipe Line. This project is something McDougal said has been in the works for at least 10 or 15 years.

“When I got here, I started pushing it,” McDougal said. “For a customer count that large, feeding two counties, there needs to be a second feed into town in case something happens with the primary feed.”

CenterPoint is in the process of securing the necessary right of ways for the pipeline, and have all but two rights of way, according to McDougal.

According to court papers, CenterPoint has filed eminent domain proceedings to acquire those two final parcels of land.

There is no start date for construction of the 12-inch pipeline that will run 12 miles, according to McDougal, due to the necessary preliminary work. He said it would take about a year to complete the project once it begins.

“Once we have all the property, an engineering firm will be hired to do the design,” McDougal said.

While the line primarily services Oxford and Water Valley, McDougal said there will be opportunities for residents out in the county who are near the pipeline to have access to natural gas, something District 1 Supervisor Kevin Frye and state officials have been advocating.

Frye met with McDougal and CenterPoint officials this past week and was encouraged by what he was told.

“We discussed the strong interest in natural gas access expressed by members of our community during the comprehensive planning process, as well as ways we might work together to facilitate expansion in the vicinity of the proposed new pipeline,” Frye said. “From my perspective, the discussion was productive, and I am optimistic that we can work together to enhance service in Lafayette County.”

“We agreed to meet again and begin working more closely together on two key issues: first, to incorporate CenterPoint’s plans for expansion into the ongoing planning for growth in Lafayette County; and second, to explore ways that the county may be able to help facilitate natural gas access in the more rural areas of our community,” Frye added.

Harold Brummett, who lives in the Denmark community, is not being impacted by the line directly, but would like to see the proposed route to include more rural residents having access to affordable energy. He would also like to see a cooperative formed among rural residents and taps installed in order to gain natural gas now or in the future.

“It’s kind of cruel to see the pipeline running a quarter-mile away from your home and not have access to cheap energy,” said Brumett, who does not oppose the gas pipeline.

McDougal said there is “potential to run feeder lines” and service customers along the line.

McDougal added that CenterPoint has been working for the last two years with Northern District Public Service Commissioner Brandon Presley and the “Zap the Gap” program, an effort to fill the gaps in high-speed internet service, cell phone service and accessibility to natural gas.

“We had more than 500 people in Lafayette County submit an interest to have gas,” McDougal said. “And we’ve met close to 80 percent of those customers, which has been a tremendous amount of work.”

McDougal explained that CenterPoint has to find “pockets” of customers they can serve and design and create projects for those areas.

The affordability of natural gas compared to propane has created a want from rural customers. Propane gas is three or four times costly than natural gas.

Presley wants to give rural residents more options for energy. He pointed out that a resident of Tocopola was paying $1,000 a month in heating costs for propane, but saw their energy bill drop to $250 per month when they converted to natural gas.

“Can that be replicated everywhere? I don’t know, but we ought to try,” Presley said.

McDougal said there has been areas where the cost is prohibitive to provide natural gas. In order to make the conversion to natural gas from propane, there may be a need for house piping, modifications to existing propane household appliances or the customer may have to purchase new gas appliances.

“On average, that runs about $800 to a $1,000,” McDougal said. “We cannot contribute money to the homeowner. But under Brandon Presley’s program, we were able to run a lot more main than we had in the past at no cost to the customer.”

He said it has allowed CenterPoint to “jump some areas where there wasn’t gas service and pick up some of these pockets of customers.”

They were able to pick up customers in Springhill, along Highway 30 and are looking at another 50 customers in Taylor.

“We continue to chug along and pick up customers,” McDougal said.

McDougal is eager to provide more natural gas to rural customers because he is one of those paying much more for propane gas.

He lives out in rural Lafayette County and doesn’t have access to natural gas.

“I’m in the same boat a lot of people are in and wish I could get natural gas out there,” McDougal said.