Engineers chart their own course in ‘a man’s world’ 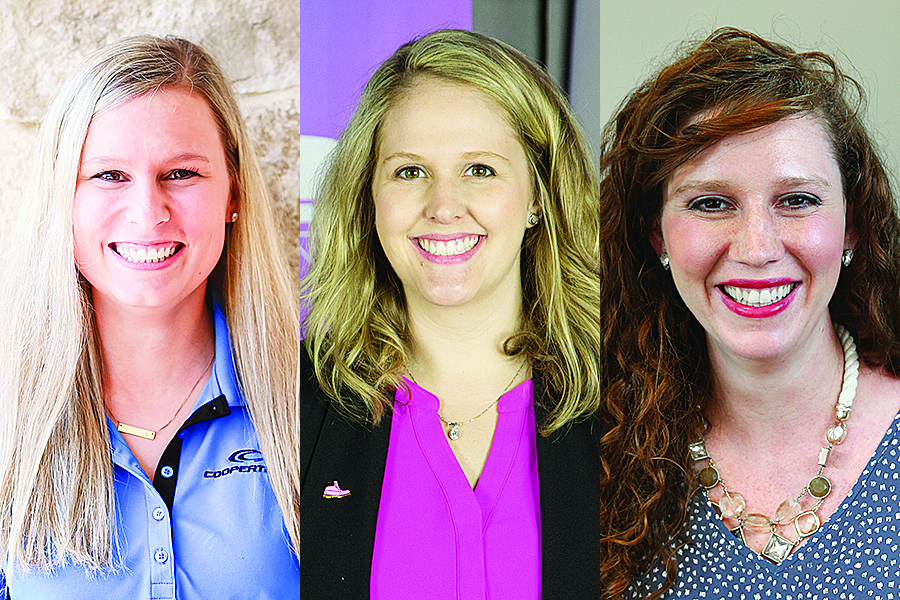 Jessica Sinak, from left, Nichole Williams and Elizabeth Taylor are three chemical engineering alumni from the University of Mississippi who are making their mark at Cooper Tire manufacturing in Tupelo.

In a field and industry traditionally dominated by men, three female chemical engineering alumni from the University of Mississippi are making their mark at the Cooper Tire manufacturing plant in Tupelo.

Jessica Sinak, Elizabeth Spence Taylor and Nichole Williams, all of whom earned their degrees within the past five years, each have launched promising careers within the company.

Sinak, a tire engineer in the technical department, earned her bachelor’s degree in 2014. She works on new product designs and supports the products already run in the plant.

“Cooper is definitely a team atmosphere, and it makes my job more enjoyable knowing that everyone is willing to help if you need it,” said the St. Louis native who celebrates her second anniversary with the company this winter.

“It’s like a little family, and I enjoy coming to work every day. One of the best things about my position is that it changes day to day. I really love that variety and thrive on change.”

A chemical engineer in materials development, Taylor, a 2011 graduate, works with the mixing of tread compounds. The Grenada native said she chose to study chemical engineering because she wanted a challenge after graduating from the Mississippi School for Mathematics and Science.

“I fell in love with chemistry and physics in high school, so chemical engineering seemed like a logical choice for me,” she said. “I enjoy the challenge. Every day is different than the last, and my education at Ole Miss fully prepared me for the challenges that I face daily.”

In addition to her daily responsibilities, Taylor is also the co-captain of the Cooper Tire Dream Team. The Dream Team is a part of the Manufacturing Institute’s “Dream It. Do It.” program, an initiative geared toward enhancing the perception of manufacturing among middle school students.

“It’s very rewarding to get students interested in careers in STEM fields,” Taylor said. “I was also awarded a scholarship to attend Vanderbilt University’s executive MBA program, which I am currently attending.”

Both Sinak and Taylor cite John O’Haver as their favorite professor.

“He always emphasized that the major component of engineering is figuring out how to solve problems, and it also happened that he was great at listening to problems, engineering or otherwise,” Taylor said. “I still call him when I need a sounding board.”

Williams, a 2013 graduate, joined the company in 2013 as a Six Sigma Black Belt. She is responsible for leading a variety of process improvement projects for the facility, focused in the plant’s mixing and receiving departments.

“I love the challenge that comes with being a Black Belt,” the Iuka native said. “I get the opportunity to work in several different areas of the plant and get exposure to different levels of our organization. I might go from a project that addresses a specific problem on a specific machine to a project affecting an entire department, to a project that requires me to interact with our corporate office.”

Williams also was one of only two honorees to speak during the awards ceremony in Washington, D.C. Her speech highlighted the importance of encouraging the next generation, particularly girls, to pursue careers in manufacturing.

Williams said that UM “always felt like home.” She intended to study chemistry but changed her mind after attending a Math Camp sponsored by the university’s Center for Mathematics and Science Education. That’s where Williams was first introduced to chemical engineering.

“I enjoyed each of my professors for different reasons, but two of my favorites were Dr. O’Haver and Dr. (Paul) Scovazzo,” Williams said. “’Dr. O’ is such an inspirational teacher who makes you feel like you can achieve anything. Dr. Scovazzo provided great guidance for a professional career, and I credit him with pushing me to a career in engineering, as opposed to just an education.”