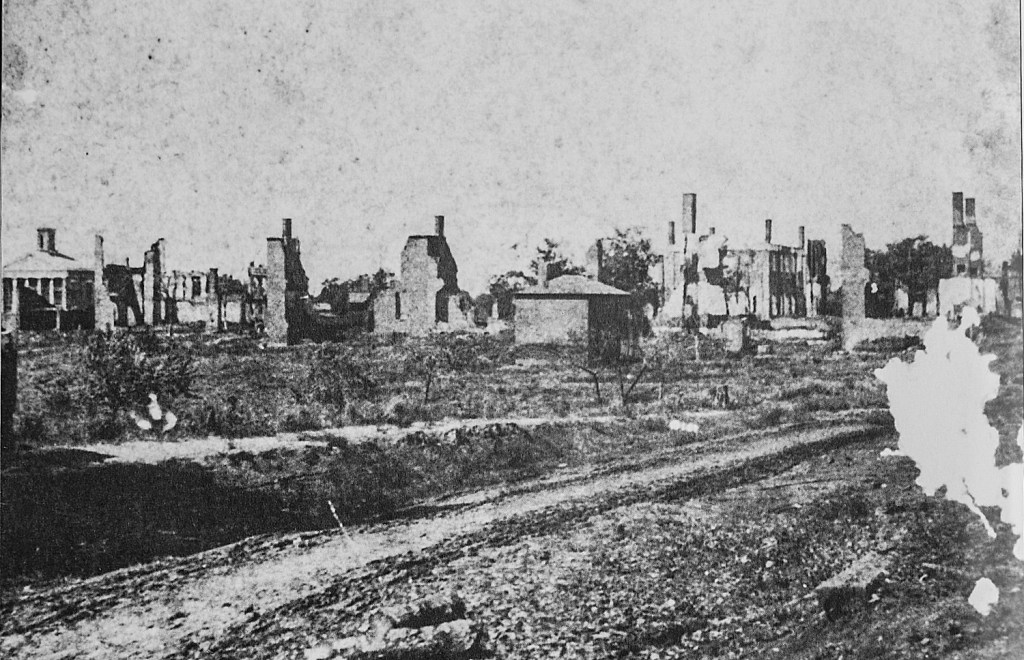 Gen. A.J. “Whiskey Joe” Smith ordered the burning of the downtown Square in1864. Some claim the building on the left side was the Cumberland Presbyterian Church on South Street; however that has been disputed over the years.

This week, I want to continue with the story of the old Cumberland Presbyterian Church that was located on South Lamar, just off the Square. It was considered the “most beautiful church in Oxford” and was lost to the wrecking ball, but not before the Faulkner brothers, Bill and John, had their say. Last week comments were from John and this week I want to pass along what Bill had to say.

This week’s photograph is the one many of you have already seen. It is the only photograph in which the Cumberland Church is shown and it is Oxford after the burning in August 1864. On the left-hand side is a building with columns. This is the church building on old South Street. Some historians state that this is not the Cumberland Presbyterian Church.

One reason why this may be confusing is that in the 1880s the facade and interior of the church were changed. The columns and Greek portico were removed and replaced, creating a new entrance on the ground floor from which a pair of staircases led to the sanctuary on the second floor. The facade was redesigned with elaborate patterns in brick and stone in the Gothic style.

Among the early leaders of the Oxford church were Judge James Howry and James Trigg. One of the first ministers was the Rev. William Burney. He lived near a creek that ran along side the ridge from the Square down South Street. The southern part of Oxford became known as “Burney’s Branch.” If you drive on Beanland Drive, just off South Lamar, you cross Burney Branch at the bottom of the hill. Another of the ministers was his son, Stanford G. Burney. He was headmaster of the Union Female Academy that I wrote about some time ago.

For many years the sanctuary of the church could seat more people that any church in Oxford. Daughters of the American War records from 1922 state, “When they built their present brick church, it was the largest auditorium in town and had a large congregation, so active that one of our ladies writing to a friend, remarked, “The Cumberlands and the dog fennel are about to take over the town.”

Today a row of businesses and several restaurants and a city parking lot occupy the space. In 1947, William Faulkner penned a letter to the EAGLE when word was passing around that the Lafayette County Courthouse might be replaced with a newer more modern building. As his brother had done in 1941, when he wrote to the EAGLE in the passing of the Cumberland Church, William Faulkner wanted his thoughts to be known on the subject of “progress.”

Faulkner’s letter was written to Moon Mullins about an editorial he had written on preserving the Lafayette County Courthouse:

“Bravo your piece about the preservation of the courthouse. I am afraid your cause is already lost though. We have gotten rid of the shade trees which once circled the courthouse yard and bordered the Square itself, along with the second floor galleries, which once formed awnings for the sidewalk; all we have left now to distinguish an old southern town from any one of ten thousand towns built yesterday from Kansas to California, are the Confederate Monument, the courthouse and the jail. Let us tear them down too and put up something covered with neon and radio amplifiers.

“Your cause is doomed. They will go the way of the Old Cumberland Church. It was here in 1861; it was the only building on or near the Square still standing in 1865. It was tougher than the Yankee Brigadier Chalmers and his artillery and all his sappers with dynamite and crowbars and cans of kerosene. But it wasn’t tougher than the ringing of a cash register bell. It had to go–obliterated, effaced, no trace left — -so that a sprawling octopus covering the country from Portland, Maine to Oregon can dispense cut-rate soda, bananas and toilet paper.

“They call this progress. But they don’t say where it is going; also there are some of us who would like the chance to say whether or not we want the ride.”

Engineers chart their own course in ‘a man’s world’