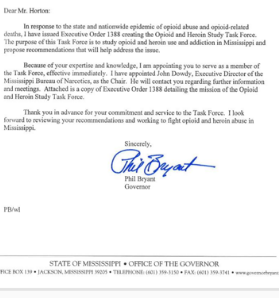 Horton, whose remarkable story was revealed late last year in a column by Oxford Eagle publisher David Magee, is a recovering addict who is emerging as a leading advocate for addiction prevention and treatment in Mississippi and throughout the region.

Gov. Bryant created the Opioid and Heroin Task Force in late 2016 and sent Horton a letter last week asking him to serve on it.

“Tell me again you don’t believe in miracles,” Horton said upon receiving the letter. “I’m so proud to attempt to pay back the state that saved my life and gave me a future, although I don’t think I ever could.”

Horton, from Georgia, got sober at a community college in Mississippi and enrolled in the Honors College at Ole Miss for undergraduate, before joining the Ole Miss School of Law. Scheduled to graduate this year, he works on behalf of those with substance use disorder and hopes to use his legal education to help others.

“Because of our expertise and knowledge, I am appointing you to serve as a member of the Task Force, effective immediately,” Gov. Bryant wrote to Horton.

Gov. Bryant said the Task Force is being be headed by John Dowdy, executive director of the Mississippi Bureau of Narcotics.

Horton was instrumental in Mississippi’s first annual Recovery Rally and Legislative Day in Jackson this Friday (January 27) beginning on the Capitol steps at 8 a.m. There will be speakers and recovery information will be available in the Rotunda from 8 a.m. until 2 p.m. on Friday.

Horton works with his non-profit Southern Recovery Advocacy based out of Oxford in his spare time and also volunteers and helps with individuals in Lafayette County Drug Court and the local treatment center Haven House, and is involved with fellow advocates in the recovery movement.