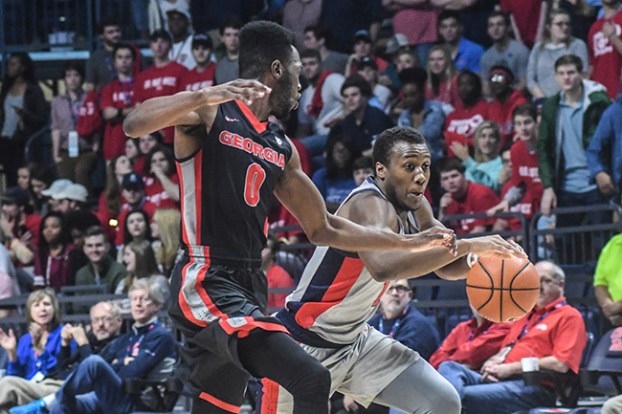 Deandre Burnett made his return Saturday, though it was a little more exhaustive than he thought it would be.

“I had a feeling in my head when I found out (Ra)sheed (Brooks) wasn’t going to be able to play that I was going to try to play myself,” Burnett said. “Just give it a go, just go out there and see how I do.”

In his first game action since spraining his ankle against Georgia on Jan. 11, Burnett logged 36 minutes and finished with 14 points on 4 of 11 shooting with three assists and three turnovers in the Rebels’ 75-71 win at Missouri. The ankle is still sore, but Burnett said it wasn’t until after the game that his body reminded him of that.

Neither Burnett nor Kennedy, his coach, thought the injury limited Burnett’s effectiveness much, particularly when it came to cutting and bursting to the rim. Burnett only shot eight free throws — an unusually low number for the SEC’s leader in attempts — though he cited the way the game was being officiated as the primary reason.

It’s a positive development for Ole Miss’ depth, which has taken a hit recently with the dismissal of forward Nate Morris and the uncertainty surrounding senior guard Rasheed Brooks, who will likely miss his second straight game Wednesday when Ole Miss (12-7, 3-4 Southeastern Conference) starts a three-game homestand against Texas A&M (10-8, 2-5) as he continues to recover from the seizure he suffered last Tuesday against Tennessee.

Burnett, who’s averaging 17.8 points, was moved to the point before the injury and will continue to log a majority of his minutes there, though the emergence of freshman Breein Tyree could allow Burnett to move off the ball at times with Brooks out. The Rebels need the production to keep coming from their leading scorer.

“We need to be realistic,” Kennedy said. “We need to score in the mid 70s to give ourselves a chance to win high-level games, and we didn’t do that the first two games when Dre goes down. … We’re continuing to tweak what we’re doing offensively just based on available bodies.”