Lafayette County Planning Commission asks what is going on at Castle Hill? 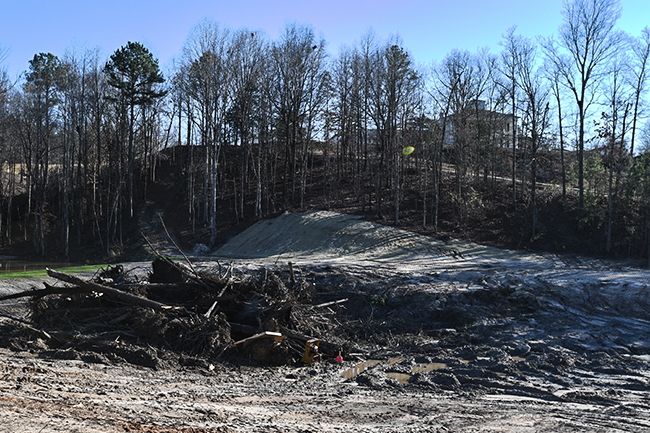 Bruce Newman Land is being cleared at Castle Hill, on Highway 6 east of Oxford, on Tuesday. Owner and operator of the event venue, Randy Abrams, told the county planning commission he has no immediate plans for the site.

Speculation has been rampant apparently, regarding work that has been taking place in and around the property where Castle Hill is situated, which prompted the Lafayette County Planning Commission to request owner Randy Abrams to come in and explain what is going on at the site.

Abrams was fairly vague in details when he spoke before the commission during their meeting Monday night, stating that he is just moving some dirt and diverting a creek on the property for erosion control.

“I’m just taking advantage of the driest part of the year to clean that area up and I don’t know what I’m going to do,” Abrams told the commission.

Castle Hill is an all-inclusive wedding event venue off Highway 6.

Abrams said he isn’t putting in a road, but he is clearing and burning some trees on the property “to do some prep work for whatever comes down the road.”

“We have resort status on 40 acres, so we can do another venue if we choose to, which we need another venue, or a restaurant. We can do any kind of commercial development or condos, or houses or whatever it will be,” Abrams said.

Asked if he was about through, Abrams said, “If we had 10 more days of dry weather, I’d be through.”

Jason Hodge was granted a preliminary and final commercial site plan for a 1,200 square foot metal building on County Road 447 that will be used as a garage for car repair.

Belle River Rentals and JW McCurdy were granted a final commercial site plan at County Road 334 and Belle River Road near the entrance to Edgewood.

Willie Dennis and Five Star Catering were granted a preliminary and final commercial site plan for a catering business near his residence that will create and deliver meals.

These matters will now go before the Lafayette County Board of Supervisors for their approval.

John Kohne recognized as Pantry Volunteer of the Year