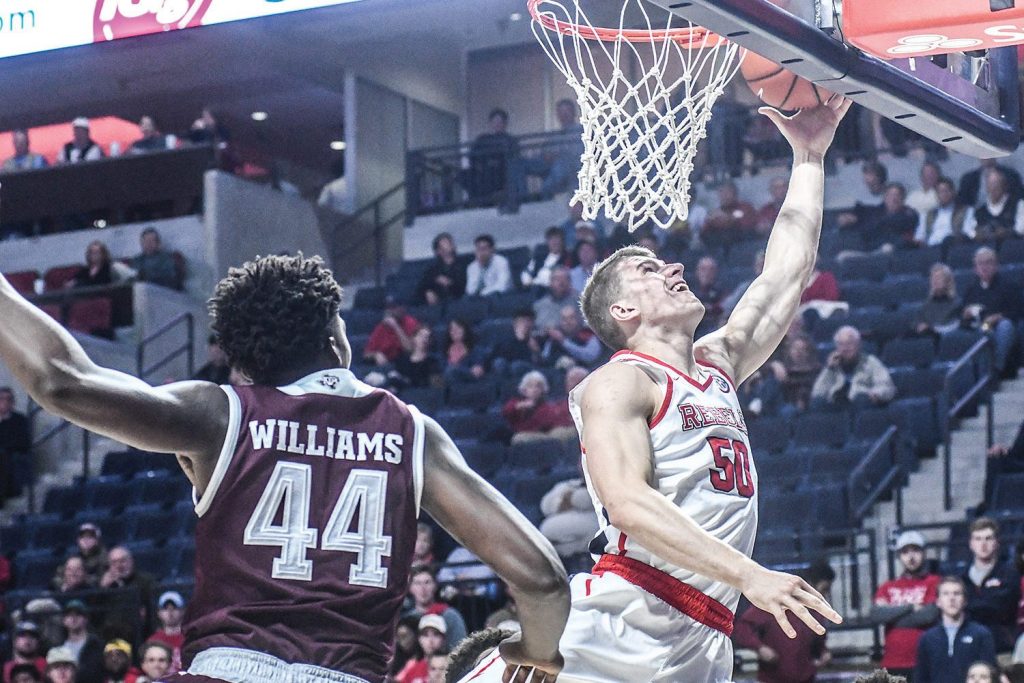 Ole Miss’ brief winning streak came to an end Wednesday with an 80-76 home loss to Texas A&M, which came into the game looking up at the Rebels in the Southeastern Conference standings. Instead of a third straight win and their first .500 record in league play, the Rebels are off to a rough start in what’s quickly turned into a daunting week.

Texas A&M’s problem this season has been its guard play. The Aggies have one of the more talented frontcourts in the SEC and showed it off Wednesday.

Big-bodied center Tyler Davis (6-foot-10, 270 pounds) and high-flying freshman forward Robert Williams (6-9, 237) may both be headed to the NBA, and the Rebels had no answer for either. Ole Miss’ depleted frontline (Karlis Silins is done with an ACL injury while Nate Morris has been dismissed) has left senior Sebastian Saiz as the only available player on Ole Miss’ roster taller than 6-7, and Ole Miss rarely pushed the Aggies’ duo away from the basket.

Davis finished 9 of 11 from the floor with nearly all of those shots, including the go-ahead layup with 1:28 left, being from point-blank range. Williams skied for a handful of alley-oops in the first half, scoring 13 of his 15 points in the first 20 minutes, and finished 6 of 8 from the field.

Just their presence alone caused problems for Ole Miss’ defense, which often tried to collapse on the Aggies’ bigs and allowed an A&M team that doesn’t shoot it all that well to get a number of clean looks from the perimeter. A&M came in shooting less than 33 percent from 3-point range but made nearly 39 percent (7 of 18) of its attempts from deep.

Ole Miss began SEC play as the best rebounding team in the league. In the last six games, the Rebels have either lost or finished even in the battle of the boards five times and have dropped to fifth in the league in rebounding margin.

And that was before A&M grabbed 16 more boards than the Rebels on Wednesday. Davis, Williams and Tonny Trocha-Morelos (five rebounds) were able to keep Saiz from his usual double-figure night on the glass, but A&M’s guards were also a problem on the boards. Admon Gilder, who led all scorers with 22 points, had seven rebounds as 16 of A&M’s 39 boards came on the offensive end, including some crucial ones late that gave the Aggies extra possessions when Ole Miss was making its comeback from 11 points down. A&M finished with 18 second-chance points.

Ole Miss (51.9 percent from the field) almost made enough shots to overcome it, but the Rebels haven’t been shooting it well enough this season to be giving extra possessions to the opposition. Not coincidentally, the Rebels are 1-3 in league games in which they’ve been outrebounded. If Ole Miss doesn’t find a way to shore that up against the quicker, more athletic frontline No. 5 Baylor will bring to The Pavilion on Saturday, things could get ugly.

Things might’ve gotten ugly for Ole Miss on Wednesday if not for the hot hand of Terence Davis, who’s starting to make a case for All-SEC consideration.

Davis was 7 of 11 from the field and seemed to keep A&M from running away with it in the second half with 3-pointer after 3-pointer. He finished 5 of 8 from long range, the most he’s made in a game this season.

Davis isn’t a great 3-point shooter — he began the night shooting just 28.6 percent from deep — but he’s best when he can catch, set his feet and fire. When his jumper’s falling, he’s an extremely difficult guard for opponents with the athleticism to routinely get to the rim and finish in the open floor.

Since breaking into the starting lineup 13 games ago, Davis has reached double figures nine times and is averaging 15.1 points over the last six, a testament to his playmaking ability despite his inconsistency from long range. He’s the Rebels’ most consistent offensive backcourt weapon, and if Saiz wasn’t still around, he’d be Ole Miss’ best player.

Next up: Ole Miss will continue its homestand Saturday against No. 5 Baylor as part of the SEC-Big 12 Challenge. Tip is set for 5 p.m.