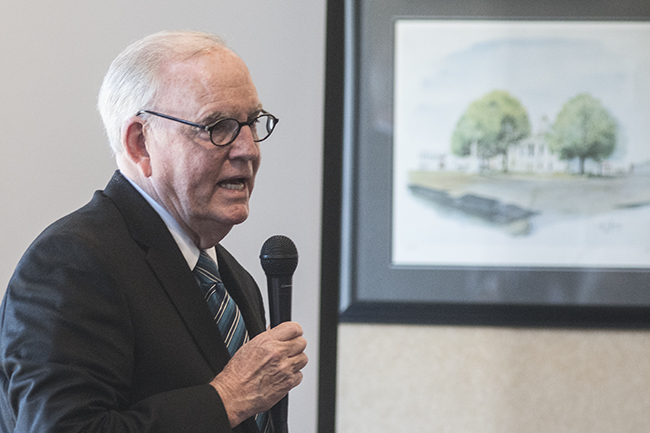 Dickie Scruggs speaks to the Rotary Club on Tuesday.

Oxford’s Dick and Zach Scruggs are on a mission to get Mississippi moving.

They have a plan that makes so much sense that others here and around the state are getting on board.

“Sign me up (to contribute),” said a member of Oxford’s Rotary Club on Tuesday, after hearing Dick Scruggs tell the club about work his non-profit Second Chance Mississippi is doing.

It starts at the grass roots, where high school dropouts and those without job skills training languish unemployed, unable to get themselves, or the state, advancing in forward, sustainable motion.

We have about 12,000 high school dropouts in Mississippi each year and more adults lacking a high school diploma (20 percent) than any other state in America. Mississippi also has about 40,000 available, unfilled jobs at any given time.

The father-son team of Dick and Zach see a path to get more of our people educated, trained, and into those jobs.

“We believe that the lack of an educated and skilled workforce in Mississippi is the root cause of every other crisis we Mississippians face, whether it be poverty, racism, childhood education and literacy, dependence on government assistance, obesity, crime and teen pregnancy,” Dick Scruggs says.

Second Chance Mississippi, based in Oxford but working throughout the state, is a vision that began to come together for Dick Scruggs during the six years he spent in prison, while serving time after pleading guilty to a judicial bribery charge.

Dick Scruggs became an adult education teacher in prison, helping fellow inmates earn equivalency diplomas, and he found it one of the more rewarding jobs he has had in a fascinating career that includes military officer and high-stakes trial lawyer.

Out of prison, he quickly connected with leaders in Mississippi’s well-developed community colleges system and found that they were doing vital if not extraordinary work teaching and training adults without high school educations. But the community colleges need more resources to make a more impacting difference faster.

Scruggs founded Second Chance Mississippi and works daily in a hands-on role with a commitment that looks a little bit like a determined dog with a bone in the effort to help. His son, Zach, was hired in the past year as executive director, and the two bring a combination of sharp-minded research, passion, and foundational financial resources that is finding a path and support.

The two primary areas of focus for Second Chance at the moment include:

1) Raising funds and awareness and building networks to successfully get more of Mississippi’s high school dropouts into and out of adult equivalency education programs.

2) Developing pilot programs that achieve the powerful double whammy of getting adult participants both an equivalency diploma and necessary job skills training so that when students finish a six-month program they can get a job, filling one of those 40,000 vacancies across the state.

The pilot programs are already under way and roughly 100 students in total are enrolled at Northeast Mississippi Community College and Itawamba Community College. The program costs for each student involved include covering the costs of tuition, paying a gas stipend weekly to participants, and paying a $250 graduation bonus.

It totals about $1,000 for each. Second Chance, via the Scruggs family, is paying the funds for these pilot program students to participate and prove the program.

If it works, and early indicators are that it is working, well, the opportunity for Mississippi’s forward progress is significant. We have available jobs, and, we have people who can fill those jobs, if educated and trained.

We have, as Dick Scruggs likes to note, one of the largest and best community college systems in America to fulfill the mission. And, we have a state comprised of caring individuals and organizations to push it all forward.

What Dick and Zach Scruggs are doing with Second Chance is paving a way, so that Mississippi has a path to get moving on.

David Magee is Publisher of The Eagle. He can be reached at david.magee@oxfordeagle.com.

Our View: Second Chance a good investment for Mississippi