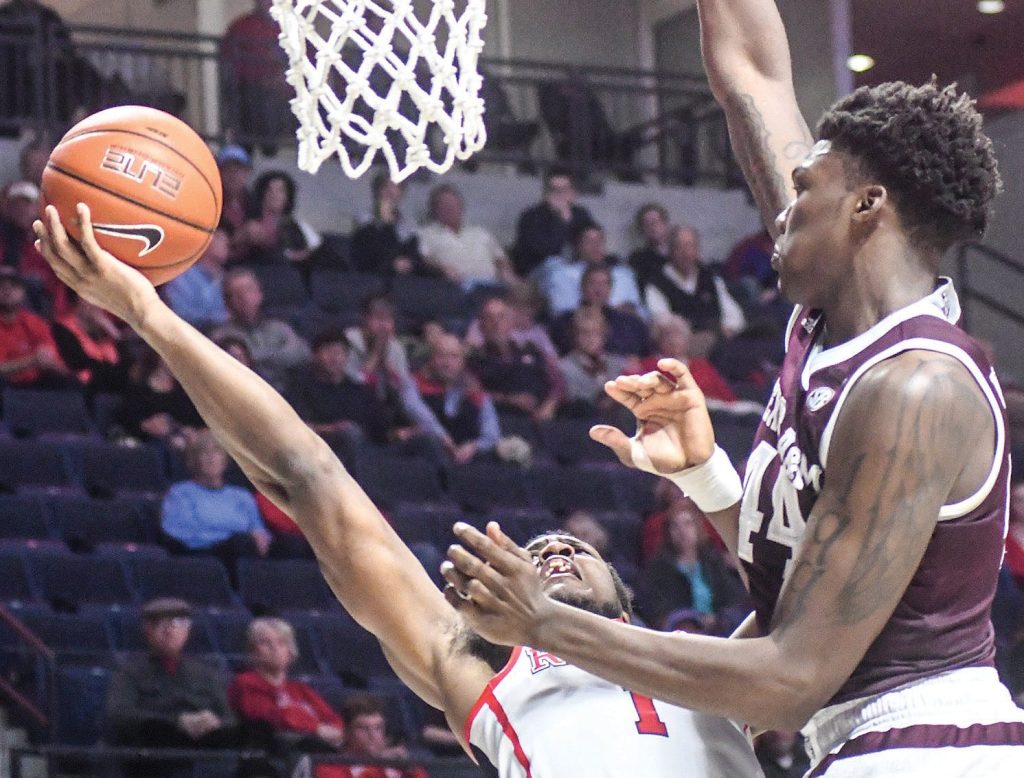 Terence Davis is familiar with the old adage about Texas. After getting an up-close look Wednesday at the first of two teams Ole Miss will play from the Lone Star State this week, the Rebels’ sophomore guard is a believer.

“That probably will be the biggest team we play all year,” Davis said. “They say everything is bigger in Texas, so I guess it’s true.”

Admon Gilder led all scorers with 22 points while Texas A&M’s frontline duo of Tyler Davis and Robert Williams helped the Aggies score more than half of their points in the paint as A&M handed Ole Miss an 80-76 loss at The Pavilion to start its three-game homestand.

Terence Davis went 7 of 11 from the field and 5 of 8 from 3-point range to finish with 19 points for Ole Miss while Sebastian Saiz also had 19 points, but the Southeastern Conference’s leading rebounder finished with just seven boards against an A&M frontcourt that imposed its will.

Tyler Davis finished with 20 points while the 6-foot-9 Williams recorded a double-double with 15 points and 14 rebounds. The duo consistently got looks from close range against Ole Miss’ smaller frontline, combining to shoot 78.9 percent (15 of 19) from the field. The 6-10, 270-pound Davis added five rebounds for the Aggies, who dominated the glass for a plus-16 margin and scored 18 second-chance points.

Deandre Burnett added 16 points in his second game back from a sprained ankle. Ole Miss’ other bigs, Justas Furmanavicius and Marcanvis Hymon, combined for just 11 points and six rebounds.

“They’re bigger, faster and stronger obviously up front,” Ole Miss coach Andy Kennedy said. “It’s just a different level. Any time we did anything with switching — and a lot of it was late in the shot clock, which is where we’ll switch a lot of ball screens — they just threw it over the top. The fight has to be earlier. You cannot allow them to touch the ball so close to the rim.”

With much of the Rebels’ defense focused on Davis and Williams, A&M, which began the night as the fourth-worst 3-point shooting team in the conference, went 7 of 18 from 3-point range with Gilder shooting 4 of 6 from deep. The Aggies shot nearly 51 percent  from the floor and posted their second-highest point total in an SEC game despite playing without their second-leading scorer, D.J. Hogg, who sat with a foot injury.

A&M turned it over 15 times but finished with 19 assists against the Rebels’ changing defenses.

“We were able to get the ball inside, so we had a good blend of inside-out basketball,” A&M coach Billy Kennedy said. “That was big for us.”

Williams caught a handful of alley oops, the final one matching A&M’s largest lead of the half at 42-33 with 2:25 left before halftime. The Aggies led 47-39 at the break.

“When you allow an SEC opponent to come in your building and their (second-) leading scorer is over there in a boot, they shoot 51 percent from the field, they score 80 and they get as many offensive rebounds as you have defensive rebounds, it’s a miracle that we were in the game,” Andy Kennedy said.

Things don’t get any easier for Ole Miss on Saturday as the Rebels host No. 5 Baylor at The Pavilion. Tip on ESPN2 is set for 5 p.m.