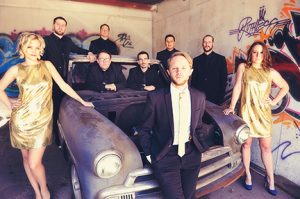 Austin, Texas soul band, the Nightowls, will perform Thursday in the spring season opener of the Thacker Mountain Radio Show at Off Square Books.

The Thacker Mountain Radio kicks off its Spring 2017 season Thursday  at 6 p.m. at Off Square Books. Admission is free.

The show will be performed at Off Square Books every Thursday, except for the week of spring break and two shows (Feb. 16 and April 20) at the Lyric Oxford. Admission is always free.

The program can be heard locally on WUMS 92.1 FM. The show can also be heard every Saturday at 7 p.m. on Mississippi Pubic Broadcasting (90.3 FM in Oxford) and online at http://www.mpbonline.org/.

Thacker producer Kate Teague said the Thacker crew is ready to crank up live broadcasts after a two-month hiatus.

“We’re raring to go,” Teague said. “We’ve had a nice break but we’re excited to get this season started because we know we have some great shows lined up.”