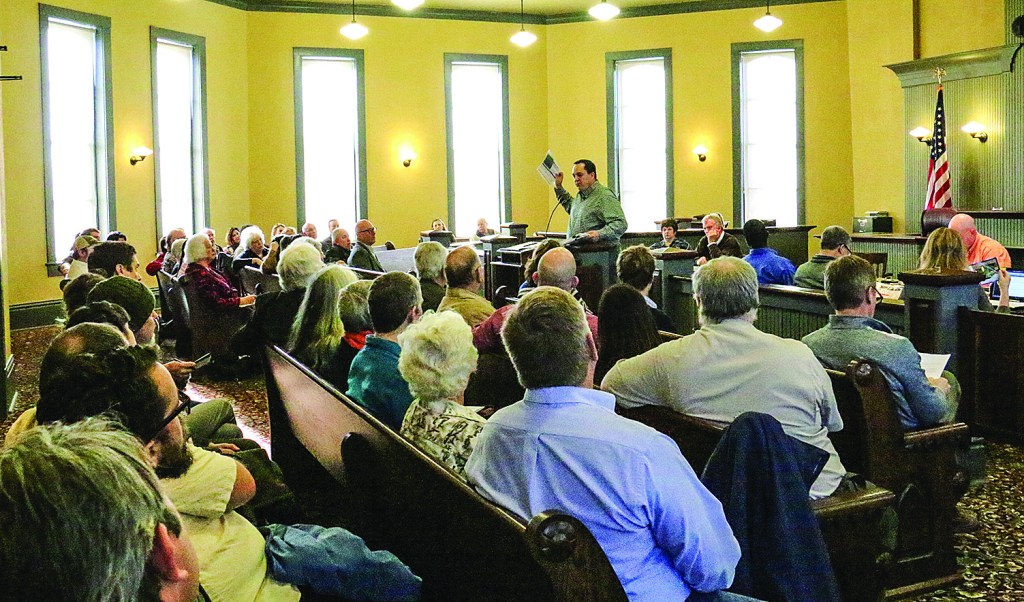 Cayce Washington, president of the Yalobusha County Board of Supervisors, speaks to the crowd gathered for their Monday morning meeting in Coffeeville.

Aimee Boutot has just one question for the developers who are trying to expand a mobile home park in Water Valley.

“If this was happening in your back yard, would you simply roll over or would you stand up and fight?” she said Wednesday.

Boutot started an online petition at Change.org recently when she learned about the possible development coming before the Yalobusha County Board of Supervisors and Water Valley Board of Aldermen, since the property is located both in and outside of city limits.

The four Oxford investors reportedly purchased the property in September of last year and formed Golden Wing, LLC, in December to develop the trailer park.

Boutot said she and those 179 people who have already signed the petition feel the development is driven by the potential of wealth.

“The damage that it will cause to Water Valley is of little concern to the developers,” she told the EAGLE Wednesday.

“Our goal is to put a stop to the development of the trailer park,” she said. “We are all for low-income housing if it is done right and in the right place. Not trailers next to Main Street.”

At a meeting Monday morning of the Yalobusha County Board of Supervisors, about 60 people attended the meeting where supervisors allowed public comments but took no official action. Nineteen signed up to speak out against the development, including Yalobusha Sheriff Lance Humphreys who lives close to the proposed development.

Water Valley Main Street Director Mickey Howley also spoke out at the meeting and asked the supervisors to consider voting to in-state a moratorium on mobile home parks in the county.

Howley said he was encouraged by the number of people who showed up at the meeting to show their disapproval of the project, but was particularly annoyed when he learned three of the four developers were at the meeting as well.

“They didn’t identify themselves or say a single word,” Howley said. “I didn’t even know they were there until after the meeting.”

The developers could not be reached for comment for this story.

Howley said he’s seen Water Valley residents debate other developments proposed for the area over the years, and there had always been some against and some in favor, like when Wal-mart wanted to open one its smaller Wal-mart Market Places in town.

“However, I have yet to meet any resident in favor of this project,” he said.

Following comments from the public, as well as talk around the board table, supervisors discussed the possible implementation of a land use ordinance in the county as an option to address development in the county and directed Board Attorney John Crow to determine the county’s options, both for the current project and future development, according to the North Mississippi Herald.

“Of course, the development came up in discussion, and everyone in the room uniformly is against it,” said Cliff Lawson, spokesman for the alliance. “People from all walks of life were in that room and everyone thinks it’s a terrible idea.”

Lawson said there’s been a lot of comments about the developers being from Oxford and that Water Valley residents are against “those people from Oxford” coming into Water Valley to develop.

“The truth is, we don’t care if they’re from Oxford, France or Water Valley,” he said. “This thing is wrong. We don’t need it and we don’t want it and it’s not going to happen here.”

Tried it in Lafayette County

Two of the developers, Josh Matthews and Hayden Alexander, purchased about 50 acres of land off Camp Ground Road and Highway 30 in Lafayette County in 2015 and proposed a mobile home park with 90 trailers on 30 acres with the possibility to expand on the remaining 20 acres in the future.

Lafayette County, much like Yalobusha County, does not have zoning and a preliminary plat was approved for Phase 1 for 32 trailers by the Lafayette County Planning Commission in a 4 to 1 vote.

However, Lafayette County does have subdivision regulations and building codes.

“We include mobile home parks as subdivisions and they would have had to meet those standards, would include roads with curbs, lighting, and our building codes,” Busby said.

Busby said the last he heard, the development did not gain approval by the Mississippi Department of Environmental Quality for their solid waste system.

During discussions on the proposed Campground project, Alexander told the Planning Commission he wanted to supply more affordable housing for Lafayette County residents.

“I live here,” he said in 2015. “I’m raising my family. I’m not going to build something I won’t be proud of or knowing that it could damage me and my family’s home.”

Other than protests from the Water Valley community, the project could be slowed down due to 20 acres of the proposed project are on a flood plain. Developers would have to get the property, which includes floodplain farmland that slopes to O’Tuck Creek, up to base flood elevation – an effort that could take thousands of dirt truck loads. Golden Wing has not set a timeline for the development.

Doesn’t fit with The Valley

“Water Valley has had a wonderful boom recently in just this sort of thing,” he said. “The proposed trailer park departs from this trend. Unlike every other form of residential housing, a house trailer starts losing value immediately. It puts pressure on the owner to squeeze them for the highest profit as quickly as possible.”

Coughlin said there are many alternatives for low-income housing that have a longer earning potential, are easier to finance and add value to the tax base.

“I wish these folks would consider something along those lines,” he said, “investing in the future with the rest of us.”

The Water Valley Board of Aldermen is expected to consider the proposed development at its upcoming meeting at 6:30 p.m. Feb. 7 at City Hall.