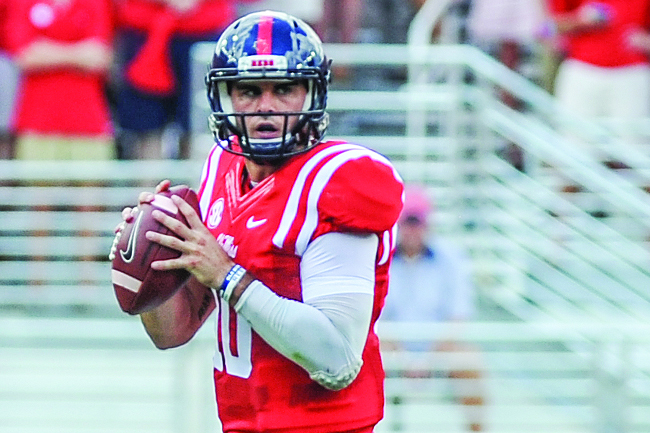 MOBILE, Ala. — It’s an important week for Chad Kelly, even if a knee injury is keeping him from playing in the Senior Bowl.

The Ole Miss quarterback is observing South practices and sitting in meetings with the other quarterbacks and coach Hue Jackson of the Cleveland Browns leading up to Saturday’s game since he’s recovering from November surgery on his right knee . Probably more important, Kelly is getting a chance to answer questions from NFL teams about his off-the-field problems.

“They’re thinking that it’s going to be taking a chance on me, for sure,” he said. “I’ve made stupid mistakes in the past. I can’t deny that. But with that being said, I’ve learned from it. I’m not the same person I was a long time ago.”

Kelly was kicked off the Clemson team in 2014 after arguing with coaches during the spring game. He also was arrested after a bar fight in 2014, eventually pleading guilty to a misdemeanor charge of disorderly conduct.

Last October, he was involved in a brawl at his brother’s high school football game in New York. He ran onto the field after his brother, Casey Kelly, apparently took a late hit and video shows several coaches restraining him on the field.

Kelly knows being upfront about his missteps will be important in meetings with NFL teams leading up to the April draft, starting this week.

“That’s the biggest thing. You’ve got to make sure you’re saying the right stuff to every team because they all speak to each other,” Kelly said. “You’ve got to be honest, of course, but you’ve got to admit to what you did and you’ve got to try to convince them that you’ve learned from those mistakes and that you’re not going to make them again.

Ole Miss tight end Evan Engram, who’s playing in the game, praised Kelly for coming to Mobile and confronting the questions head on.

“I’m proud of him showing up because he’s not hiding from anything,” Engram said. “He’s ready to face the questions. I told him (Monday) night, ‘You just need one team to give you a chance.’ Whatever team that is, is going to get a kid who’s made some mistakes but is learning from them. And they’re going to get a good one.”

Kelly is spending his mornings working out at Dr. James Andrews’ Exos facility in Pensacola, Florida. Then he heads to Mobile for practice, meetings and visits with team officials.

Kelly is hoping to be able to throw at the NFL combine or the Rebels’ pro day. He was leading the Southeastern Conference with 2,758 passing yards when he tore his ACL and lateral meniscus against Georgia Southern. He passed for more than 4,000 yards as a junior.

Baylor quarterback Seth Russell has also been in Mobile, while recovering from a season-ending ankle injury.