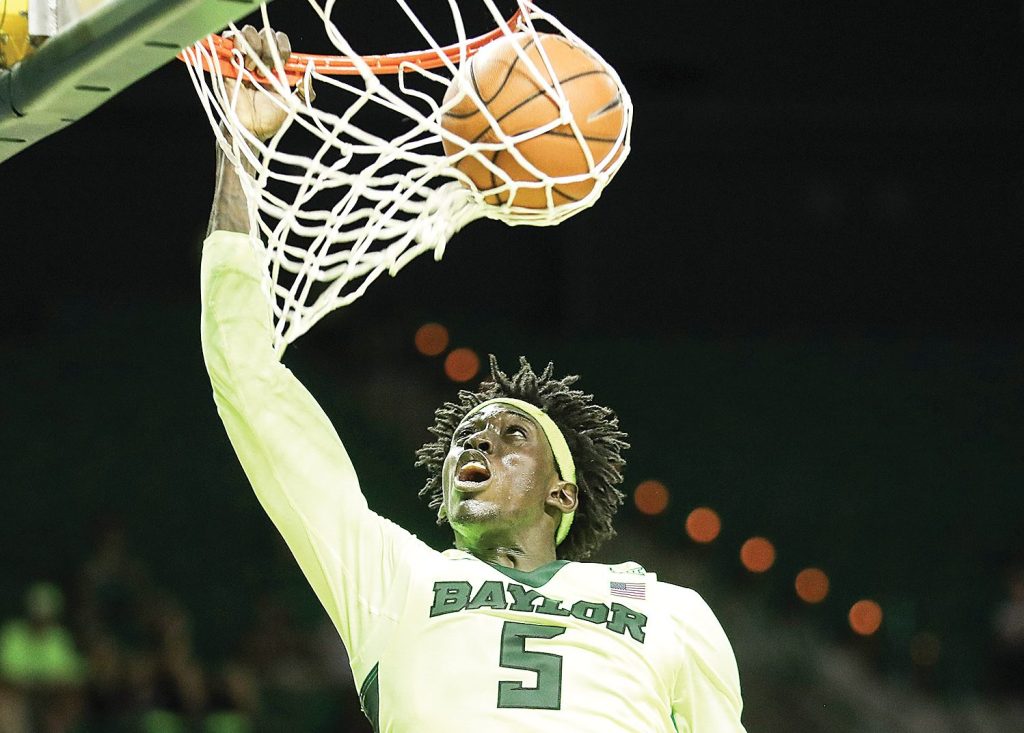 Baylor forward Johnathan Motley (5) leads the Bears in scoring and rebounding. Motley and the rest of fifth-ranked Baylor’s bigs will be the ultimate test for Ole Miss’ smaller frontcourt when the teams meet Saturday at The Pavilion at Ole Miss. (Baylor Athletics)

If Ole Miss doesn’t play bigger its next time out, the Rebels will be in big trouble.

Ole Miss will continue its Texas two-step Saturday when No. 5 Baylor visits The Pavilion as part of the SEC-Big 12 Challenge (5 p.m., ESPN2), providing the Rebels with their biggest opportunity of the season. The Bears, who were ranked No. 1 nationally two weeks ago, are No. 1 in the NCAA’s latest RPI rankings and tied atop the Big 12 standings with No. 2 Kansas.

Baylor’s strength lies in a frontcourt consisting of future NBA talent much like Texas A&M, which had its way with Ole Miss (12-8) on the interior in Wednesday’s 80-76 win. The Aggies scored 44 of their points in the paint with big men Tyler Davis and Robert Williams combining to make 15 of their 19 shots, most of those coming from point-blank range against the Rebels’ smaller frontcourt.

A&M also dominated the glass, outrebounding Ole Miss 39-23. It’s the fourth time in the last six games the Rebels have been beaten by double digits on the boards.

“Any time you get outrebounded by 16 on your home court, it’s hard to pull out a win,” sophomore guard Terence Davis said.

Baylor (19-1) has four players in its frontcourt rotation 6-foot-8 or taller led by All-Big 12 performer Johnathan Motley, who’s averaging a team-high 16.2 points and 9.6 rebounds. The 6-10 Motley has paired with 7-footer Jo Lual-Acuil Jr. (9.8 points, 7.2 rebounds) to create a formidable frontline duo for the Big 12’s top team in rebounding margin (plus-8.3) and scoring defense. Lual-Acuil also leads the league in blocked shots at 2.9 a game.

“Their frontline is a lot like (Texas A&M),” Kennedy said. “They’ve got a couple guys who look like Robert Williams.”

Ole Miss is limited in how it can combat that kind of size. Karlis Silins’ ACL injury and Nate Morris’ dismissal have left Sebastian Saiz as the Rebels’ only available player taller than 6-7. Ole Miss switched from man defense to a 2-3 zone to its 1-3-1 halfcourt trap nearly every time down the floor to try to keep A&M guessing, but the Aggies usually cleaned up any misses with 18 of their rebounds coming on the offensive end.

Davis pulled down just two boards against A&M after posting back-to-back 11-rebound games the previous week, a level of inactivity that won’t cut it against Baylor. Davis said the Rebels have to crash the glass from every position on the floor if they want to hang around with a team that’s bigger and more athletic than what they saw two days ago.

“I think we’ve just got to bring it,” Davis said. “They’ve got some big guys, some pros on their team. We’ve got to team rebound.”