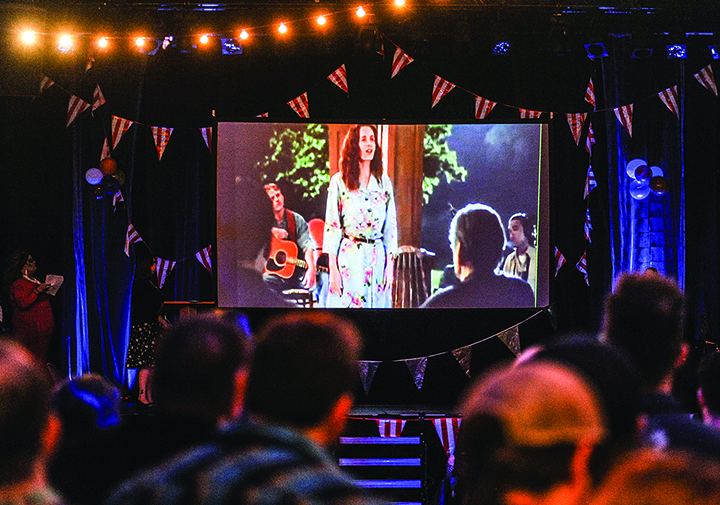 Participants watch a film during the Oxford Film Festival awards show at the Lyric in Oxford, Miss. on Saturday, February 20, 2016. The film festival receives funds from both the Mississippi Arts Council and the Mississippi Development Authority.

Members of Oxford’s arts community want state leaders to keep politics out of the arts after Republican lawmakers introduced bills that would dissolve the Mississippi Arts Commission and roll their duties under the Mississippi Development Authority’s umbrella.

MDA is a larger agency that works on job creation and promotes tourism.

Yoknapatawpha Arts Council Director Wayne Andrews said if the bills are passed, the restructuring would have a dramatic impact on Lafayette County and Mississippi.

The state’s tourism department, Visit Mississippi, has been folded into the MDA and Andrews said it has changed access to funds for Visit Oxford, the local organization that helps promote Oxford tourism.

“The co-op marketing funds are no longer being offered to encourage local tourism offices to market the unique features of their communities,” Andrews said. “The role of an Arts Commission is to foster the creative economy, promote art, and inspire local community to tap into the arts and culture of their region to foster economic growth.”

A sponsor of one bill is Senate Tourism Committee Chairwoman Lydia Chassaniol of Winona. She says she supports Republican Gov. Phil Bryant’s goal of consolidating agencies to try to save money.

Chassaniol was an Arts Commission board member in the 1990s. She says businesses looking to locate in Mississippi often inquire about arts and culture.

Under the bill, the current commission and its board would be abolished. The governor would appoint a new 15-member advisory board, which would meet at the discretion of MDA Executive Director Glenn McCullough

Senate Bill 2611 was sent to the Senate Appropriations Committee. House Bill 1325 was sent to two House committees. Tuesday is the deadline for the groups to debate both bills.

“The Arts, Chambers of Commerce and Tourism offices work hand in hand to create a community that has quality of life for residents, fosters businesses investment, and attract visitors,” Andrews said. “Mississippi had 22 million visitors last year — if the arts on the state and local level suffer, it is not the painter or musician who will suffer. It is the towns.”

Andrews said events like this weekend’s Fiber Arts Festival and the Oxford Film Festival draw thousands of people in from out of the region, which puts heads in Oxford’s hotel beds and diners in its restaurants, all earning tax dollars that go directly back into Oxford.

“The Arts Council working with local arts groups surveyed attendees to arts and cultural events through 2016 — our sample showed over 200,000 visitors to arts events in Lafayette County,” Andrew said. “I am concerned how this change, that might save a few dollars, could jeopardize a major source of revenue for local businesses. Painters will continue to paint, musicians write but the impact will be reflected in local jobs in hotels, restaurants, gas stations and shops.”

Andrews is spearheading a meeting to be held at 1 p.m. Sunday at the Powerhouse Community Arts Center to provide information and updates to people concerned about the proposed bills, and rally support and come up with ways to fight the end of the MAC.

In a statement released Thursday and sent to state leaders, the Oxford Film Festival board and executive director Melanie Addington said while Oxford has a strong arts community that is often linked to economic development in Lafayette County, the arts and tourism differ in their approach, resources and how they foster partnerships.

“We need our arts, tourism and economic development leaders to coordinate, but should have experts in each field leading those efforts,” the statement read. “The Mississippi Arts Commission does more than fund arts programs across the state. They provide the tools that help communities build on their unique qualities, organize resources, and attract visitors creating an economic impact to businesses. The MDA can manage many things when it comes to the growth and economic health of Mississippi and local communities, but the arts is not one that they have the expertise to handle.”

The film festival, as well as many other local events and programs, receive funds from both the MAC and the MDA.