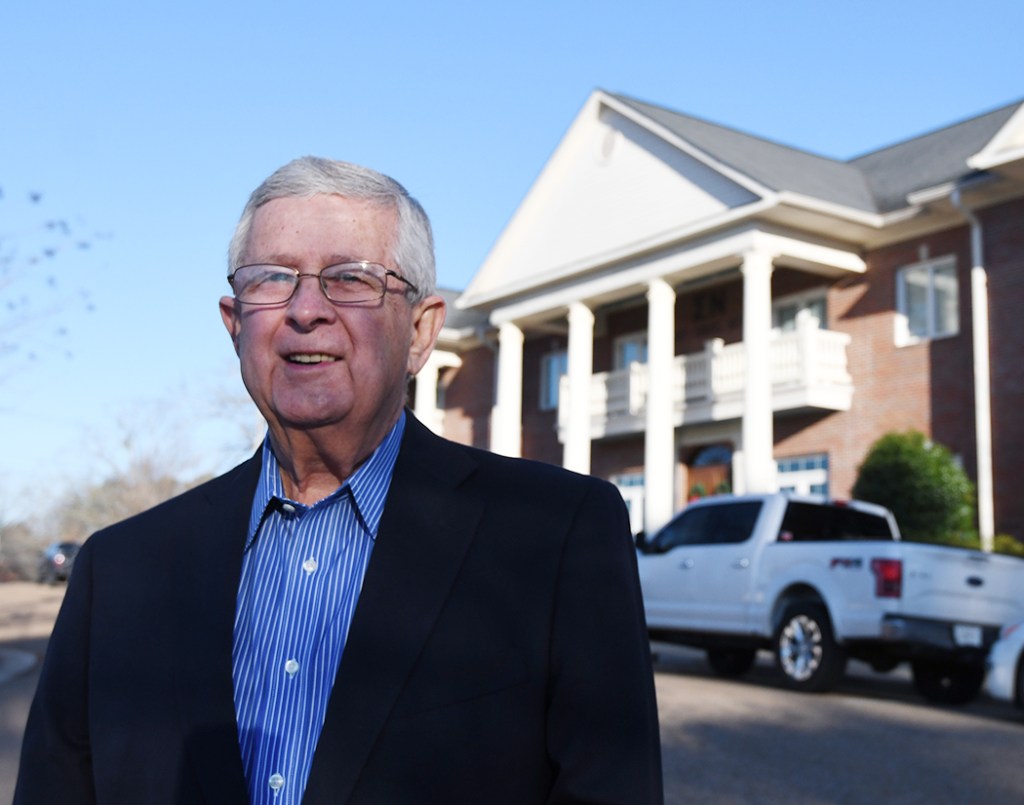 Ed Meek is being initiated into a fraternity at Ole Miss.

A story of friendship and brotherhood that began at Ole Miss almost six decades ago comes full circle Sunday when Oxford’s Ed Meek is initiated into a fraternity on campus.

The 76-year-old Meek is being initiated into Sigma Nu, a fraternity he briefly pledged as a freshman at Ole Miss in 1958, with encouragement of the late legislator George Payne Cossar, before dropping out weeks later due to cost.

But decades of lasting friendships and a sort of unofficial membership will now be formalized with Meek becoming a part of Sigma Nu’s Epsilon Xi chapter at Ole Miss, which includes alumni Trent Lott, Roger Wicker, Eddie and Johnny Maloney, and Archie and Eli Manning.

Meek is being initiated with the Ole Miss Sigma Nu 2016-2017 student class that just completed pledging – even though he pledged 59 years ago.

“Everyone who knows Ed knows that he considered himself a Sigma Nu every day of his adult life and we felt the same way about Ed,” said Oxford resident John Green, a chapter advisor. “The question was, how do we get him formally initiated?”

He was unanimously approved.

“The chapter is not doing anything for Ed,” said Ole Miss alum, longtime active Sigma Nu and Charleston native Carson Hughes. “Ed is honoring the chapter by accepting this.”

Meek, originally from nearby Charleston, did not have much money in high school and wasn’t even sure he would attend college until Cossar, a lawyer, state politician and Sigma Nu from his hometown pushed him toward Ole Miss and the fraternity with strong encouragement.

“I literally did not understand what the Greek system was as a freshman in 1958,” Meek said, retired as the longtime assistant vice chancellor for public relations and marketing at Ole Miss, and now overseeing the New Media Lab as founder, an operation that includes the news site hottytoddy.com.

“I was just having fun with everybody else until my first bill came for something like three hundred dollars,” Meek said. “I had to pay my own way through college and couldn’t see how to make that work.”

Meek dropped out of the fraternity before initiation, but maintained lasting friendships with members of the chapter then and others to come throughout the years to the point that many just assumed that Meek was a member.

“I have always felt like I was a Sigma Nu,” Meek said. “Some of my best friends in the country have remained Sigma Nu’s even though I was just there three weeks. The bond that developed has always been there, with friends like Trent (Lott) and Carson Hughes (of Jackson).

“It became the brotherhood for me even though I didn’t go through the process like the others,” Meek said.

Meek’s family had humble means in Charleston and he had worked odd jobs since elementary school to help out and to save enough to manage on his own one day.

When his older brother, Jon, went to college at Mississippi State when Meek was in the seventh grade, he paid his brother’s tuition of $125. And he assumed that by the time he graduated from high school he would just keep working and earning.

But a high school English teacher encouraged Meek, known in Charleston by the nickname Budgie, to attend college after reading a senior year term paper. The only school he had visited was Mississippi State, where his brother attended, but he found out they didn’t have a journalism program and he wanted to be a photographer.

“My mother called George Payne (Cossar) asking him what to do,” Meek said. “He said there’s only one thing to do. Go to Ole Miss and be a Sigma Nu.”

The summer before college Meek, an Eagle Scout, got a job as a firefighter for the forestry commission thanks to a tip from the late Congressman Jamie Whitten, and though the pay was just $1.25 per hour, it was multiplied for overtime hours. He ended up on one fire for 32 straight days, giving him enough money to start Ole Miss.

Meek used the money for tuition, housing and to get married, starting a life with his wife Becky, a fellow university student — they recently celebrated the birth of their first great-grandchild.

Meek was on a mission as an Ole Miss student to learn journalism and earn money. He and fellow student Larry Speaks, who later became a press spokesman for the White House under Ronald Reagan, started their own student media business.

They had a Teletype machine on campus and submitted stories to papers throughout the region including the Clarion Ledger (Jackson) and the Birmingham News (Alabama) under varies pen names.

Becky Meek ran a beauty salon in Oxford while a student and had quite a successful business – earning “more than she made with a master’s degree,” Meek said, laughing.

On the side, his entrepreneurial hunger and spirit continued and he and Becky developed and owned successful businesses including magazines and trade shows and the popular Tupelo Furniture Market.

Meek retired from Ole Miss in 1998 and later sold his magazine and trade show business, but didn’t stop there. Starting the website hottytoddy.com that serves the Ole Miss and Oxford community, and donating funds to the journalism school that resulted in the fast-growing Meek School of Journalism and New Media, Meek’s impact and contributions are still being felt.

“Everything we have we owe to the university and we wanted to give back,” Meek said.

And now, this weekend, some longtime friends from Ole Miss are saying thank you back to Ed Meek, officially initiating him into the fraternity that has long considered him a brother.

“Budgie (Meek) is very much what each person in college should strive to be,” Hughes said. “In my view Sigma Nu is honored that his long ago ‘pledge’ will now ripen into official full membership, a condition many thought already existed.”