Ole Miss’ upset bid comes up short against No. 5 Baylor 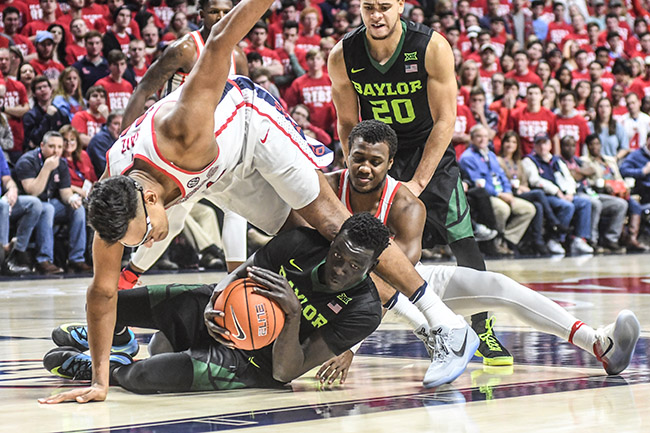 Ole Miss gave itself a chance to pull off what would’ve been one of the nation’s best wins right until the final couple of minutes it didn’t.

Sebastian Saiz scored 20 points and grabbed 10 rebounds while freshman Breein Tyree had his best game in an Ole Miss uniform, but No. 5 Baylor’s inside presence coupled with some late turnovers spoiled the Rebels’ upset bid in a 78-75 loss Saturday at The Pavilion as part of the Southeastern Conference-Big 12 Challenge.

“All credit to Baylor,” Ole Miss coach Andy Kennedy. “I’m proud of my guys. I thought they played really hard. If they play this hard the remainder of the season, we’ll win some more games.”

Ole Miss led by as many as 15 and held a 10-point advantage with 14:43 left, but the Bears (20-1) went on a 16-4 run to take their first lead and went back and forth the rest of the way with an Ole Miss team that overcame another double-digit rebounding deficit (37-27) against Baylor’s formidable frontline by shooting 50 percent from the 3-point line in the first half, making 22 of its 23 free throws and limiting itself to a season-low seven turnovers.

But the Rebels self-destructed down the stretch.

Tyree finished 6 of 9 from the floor and scored 18 of his career-high 20 points in the second half, helping the Rebels (12-9) stay close with Baylor (20-1) making its run. A 3-pointer from Tyree put Ole Miss up 72-70 with 2:16 left, but the Bears answered with Jake Lindsey’s 3 before Cullen Neal threw the ball away on an inbounds pass and turned it over again in a one-possession game after Baylor’s Jo Lual-Acuil Jr. hit a pair of free throws following an offensive rebound.

“(The turnovers) have been problematic for us,” Kennedy said.

Manu Lecomete, who went 5 of 6 from 3-point range on his way to a team-high 17 points for Baylor, hit his final 3 on the Bears’ next possession to put the Bears up 78-72. Three late free throws by Neal was all Ole Miss mustered in the final 20 seconds as the Rebels lost out on a chance at their first win over a ranked team since January 2015.

Ole Miss will jump back into SEC play Tuesday against Mississippi State to wrap up its three-game homestand.

Lual-Acuil, a 7-footer, and fellow forward Johnathan Motley each added 16 points and nine rebounds for Baylor, which limited Ole Miss to 33 percent from the field in the second half. That’s when the Bears had an easier time getting the ball inside against the Rebels’ zone defenses with Saiz, who had just four second-half points, coming and going after picking up his third foul with 13:51 left as Lual-Acuil and Motley combined for 21 points after halftime.

“The second half, they probably made a game plan against the 1-3-1 and they attacked it a little bit better,” Tyree said. “We weren’t rebounding the ball the way should have, and they capitalized on it.”

Watch Kennedy and Tyree talk about the loss in the videos below.