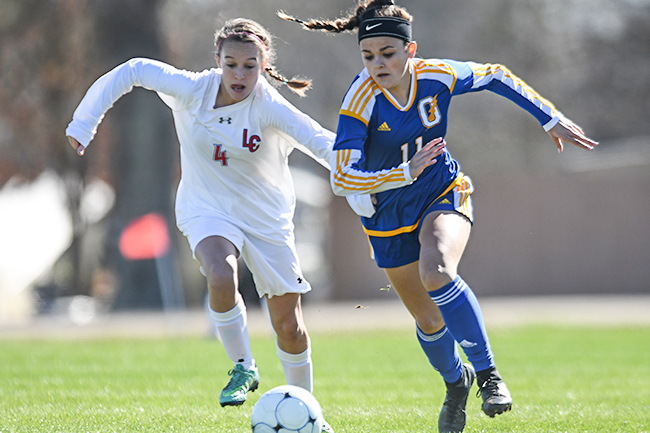 GRENADA — The season has not presented many obstacles for the Oxford High girls soccer team, but Saturday became one of those rare occasions when the Chargers took on Grenada in the second round of the MHSAA Class 5A state soccer playoffs.

In what was one of the more testing games, Oxford defeated Grenada 5-3 to advance to the 5A North Half title game. The Chargers will host Germantown, who defeated Lewisburg 3-2 in penalty kicks on Saturday.

It was a slow start for Oxford (17-0) as they took a little bit to adjust to Grenada’s attack. It cost them as the Chargers took the first lead of the game with a goal in the eight minute.

“We were out of sync there for the first little while,” Oxford head coach Hunter Crane said. “Grenada always does that to us for some reason. Whenever we show up here they give us a good game and theire a feisty little team. I knew it was to be a fight and it was for the whole time.”

As has been the case when Oxford falls behind, the deficit does not last long and it was the same story on Saturday when freshman standout Morgan O’Connor scored two minutes later to level the match at 1-all.

Oxford grabbed their first lead when Grace Anne Joyce scored a goal from long-range in the 15th minute for a 2-1 advantage. The Chargers would not relinquish the lead as O’Connor scored two more goals in the final eight minutes of the first half for a 4-1 lead at the break.

“We got comfortable with our possessions, moving the ball,” Crane said. “We started getting some shots off and our possession picked up once we got that first one. We kind of woke up a little bit. It’s Saturday. It’s cold and it hasn’t been cold in a while and it was on the grass. Just all the excuses, but we just didn’t play well at first.”

The large lead has usually been enough of a cushion for the Oxford defense but Grenada did something no other opponent has been able to do this season. the Chargers made it a 4-3 game with back-to-back goals, one coming off a penalty kick, with 19 minutes remaining in the match. It was the first time all season Oxford had allowed an opponent to score three goals.

“We weren’t winning the ball in the air,” Crane said. “The ball bounces funny and the wind was blowing it and stuff. We weren’t judging it very well and (Grenada) was happy to make the runs and stuff on their home field and kind of able to know how it bounces.”

Oxford got a much-needed insurance goal by Anna Mills in the 71st minute for the winning margin.

“We probably needed to be tested a little bit to see how far we had to go,” Crane said. “It showed me we got gas there in the end. I had to leave the starters in the whole time. You could tell we had put a lot into the game, especially the last 10 minutes.”