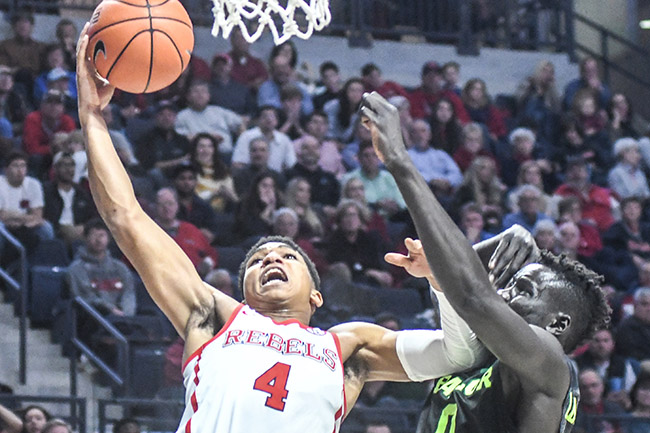 Breein Tyree’s 3-pointer put Ole Miss ahead with a little more than two minutes left in Saturday’s game at The Pavilion, and it looked as if an upset of No. 5 Baylor might actually become a thing for the Rebels. Instead, Ole Miss lost out on a chance to notch the kind of win that would’ve stacked up against anybody in the country in a 78-75 loss, dropping the Rebels to 0-2 on their homestand.

Here are three takeaways from the loss:

Much like Texas A&M three days earlier, Baylor was a bad matchup for Ole Miss with its much bigger frontline. It took a little while, but the Bears ultimately did what many thought they’d do inside against the Rebels.

Ole Miss hung with Baylor on the boards early with the teams even as eight rebounds apiece at one point, but behind All Big-12 forward Johnathan Motley and 7-footer Jo Lual-Acuil Jr., the Bears led the rebounding advantage 21-14 at the half and eventually imposed their will. The Big 12’s top rebounding team finished plus-10 on the glass and pulled down 13 offensive rebounds, turning them into 16 second-chance points.

Sebastian Saiz mixed some jumpers with a handful of nifty finishes around the rim to finish with 20 points and 10 rebounds, but only four of those points came after halftime as the Rebels’ senior forward dealt with foul trouble. The rest of Ole Miss’ team combined for just 17 rebounds while Lual-Acuil and Motley, Baylor’s leading scorer, each finished with 16 points and nine rebounds.

While Baylor’s upper hand on the glass wasn’t surprising, Ole Miss coach Andy Kennedy isn’t happy with the energy he’s getting from the Rebels’ other frontcourt players. Marcanvis Hymon had just two rebounds in 31 minutes while Justas Furmanavicius wasn’t much better, getting four boards in 23 minutes. It’s the fifth time in the last seven games Ole Miss has been outrebounded by double digits.

Breein Tyree is the point man

Cullen Neal moved off the ball early in the season as Ole Miss tried to utilize his shooting ability more, but Deandre Burnett just isn’t giving Ole Miss much there if he’s not able to get to the free-throw line. Burnett had another rough shooting night, going 1-for-10 from the floor to finish with four points, the fewest he’s had this season when playing a full game.

But Tyree picked up the slack with the best performance of his young career as the freshman went 6 of 9 from the field, 2 of 3 from beyond the arc and 7 of 7 from the free-throw line to finish with a career-high 20 points, 18 of those coming in the second half to keep Ole Miss afloat when Baylor made its surge from 10 down. Outside of Terence Davis, he’s the Rebels’ best chance to break down the defense and either finish at the rim, get fouled or draw extra defenders to get an open look for somebody else.

He also had more assists (3) than turnovers (2) on a night when Ole Miss set a season-low in turnovers despite some killers late. Tyree is the Rebels’ best playmaker at the position and should get most of the minutes going forward given Burnett’s struggles.

After leading one of the nation’s best teams for the first 30 minutes, there’s no other way to say it other than Ole Miss blew a golden opportunity.

Ole Miss would’ve needed more wins in conference play, but the Rebels looked primed to pick up the kind of impactful win that might’ve rekindled talk of an NCAA Tournament berth. Baylor, which was ranked No. 1 in the country a couple weeks back, is No. 1 in the NCAA’s latest RPI rankings and is in the mix to be a No. 1 seed in the Big Dance.

Losers of four of their last six games, the Rebels have fallen outside the top 50 of the RPI and only have two top-100 wins. Barring a significant turnaround in the second half of the league schedule or a run to the SEC tournament championship in March, the NIT is the best the Rebels can do.

Rasheed Brooks came off the bench for his first game action since suffering a seizure against Tennessee on Jan. 17, receiving an ovation from the home fans when he subbed in early in the first half.

Brooks spent a couple of days in Baptist Memorial Hospital undergoing tests after collapsing on the floor and being carried off on a stretcher. The senior guard watched Wednesday’s game against Texas A&M from the bench as the team awaited word on his final round of tests.

Kennedy said all of Brooks’ tests came back “clear.” He also said while dehydration is still believed to have contributed to the seizure, the team has not been told exactly what brought it on.

Brooks had two points, three assists and a turnover in 14 minutes.

“I thought emotionally he was really locked in,” Kennedy said. “He hasn’t played to the speed of the game in quite some time. He wanted to play. I wanted to play him. He’ll get better as he gets more in rhythm.”

Next up: Ole Miss will conclude its three-game homestand back in SEC play Tuesday against Mississippi State. Tip is set for 6 p.m. on the SEC Network.