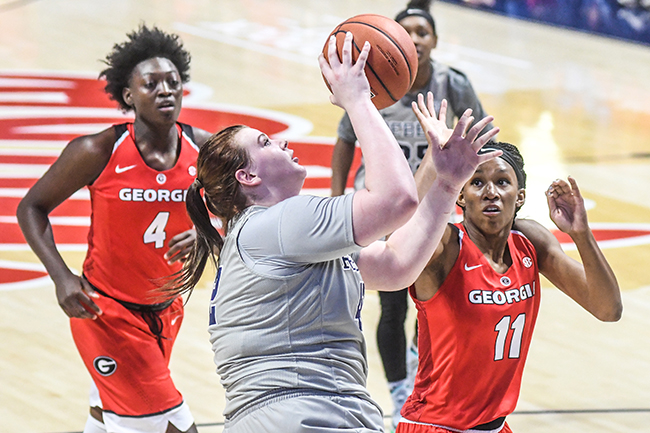 The back half of January has not been kind to the Ole Miss women’s basketball team. Losers of their last four games, dating back to Jan. 16 at Mississippi State, the Rebels have been in need of some good results to turn around what started as a promising season.

The good news finally arrived on Sunday afternoon as Ole Miss used a big third quarter and rallied from eight points down to defeat Georgia 69-62 inside the Pavilion. It was the first win for the Rebels since defeating Tennessee on Jan. 12

“It was a grind, I knew it was going to be,” Ole Miss head coach Matt Insell said. “Georgia is very physical. They have a great team. …We’ve lost four straight. I didn’t care how we won. We just needed a win. We got that.”

After getting run out of the gym by Kentucky in Lexington last Thursday, Ole Miss (14-8, 3-6 Southeastern Conference) came out sluggish against the Bulldogs to start. The Rebels were shooting 32 percent from the floor (5-of-16) in the first half and trailed Georgia 34-26 at the break. Freshman Shelby Gibson was the only Rebels in double figures in the first half, scoring a team-high 10 points in the first 2o minutes of play.

The intermission did Ole Miss some good as they came out firing from the locker room. The Rebels hit five three-pointers, fueling a 25-7 third quarter as they grabbed their first lead of the game during the run for a 51-41 lead heading into the final 10 minutes. They did not relinquish the lead.

“They didn’t have a lot of choice after halftime,” Insell said of his team showing toughness. “We talked a lot about it and I saw our basketball team that we’ve all seen the majority of this year come out in that third quarter and play. That was the first time I’ve seen them in about three weeks. Our basketball team needed this win.”

Madinah Muhammad tied Engram with 19 points for the Rebels, using four three-pointers. Shandricka Sessom flirted with a triple-double with 16 points,  eight rebounds and six assists. Alissa Alston and Gibson each finished with 12 points.

Ole Miss gets the week off before heading to Gainesville to face Florida on Feb. 6

There will be a key bench piece missing for Ole Miss in the final month of the season as freshman guard Torri Lewis broke her foot during practice while diving for a loose ball with a teammate on Saturday. Lewis was averaging 3.6 points per game but was shooting 46.3 percent behind the three-point line. With Lewis out, fellow freshman Bree Glover got valuable minutes in Sunday’s win.

“Torri Lewis has played her butt off all year and just a freak thing happened in practice,” Insell said. “We need Bree Glover to be good for us.”