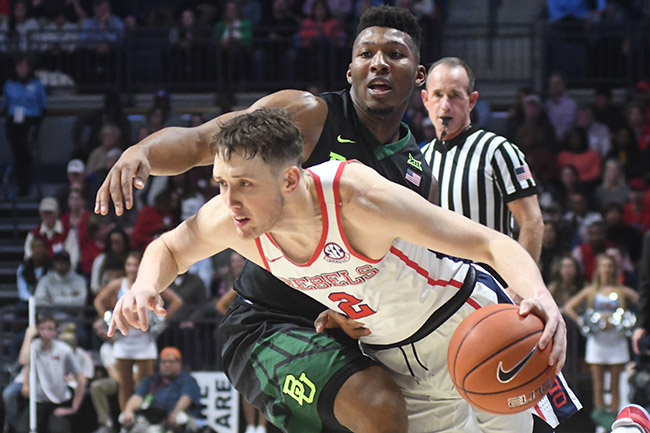 Ole Miss is trying to not let its homestand go to waste, and a loss to its biggest rival would only make things worse.

The Rebels will end a string of three straight home games Tuesday when they host Mississippi State at The Pavilion (6 p.m, SEC Network). Ole Miss has held its own against the Bulldogs lately with five wins in the last six meetings between the teams and four in a row in its own building.

But the Rebels (12-9, 3-5 Southeastern Conference) are in the bottom half of the SEC standings having lost six of their last nine games overall, including back-to-back setbacks to Texas A&M and No. 5 Baylor at The Pavilion. Ole Miss has dropped to No. 69 in the NCAA’s latest RPI rankings and will need a significant turnaround in the second half of its league schedule to be included in any kind of NCAA Tournament conversation.

“We’ve got to find a way to win another game,” Ole Miss coach Andy Kennedy said. “That’s my goal. I’d like for it to be Tuesday.”

Mississippi State (13-7, 4-4) presents a better matchup for Ole Miss, which didn’t offer much resistance against the bigger frontlines of Texas A&M and Baylor in getting outscored a combined 70-48 in the paint and finishing minus-26 on the glass.

Senior forward Sebastian Saiz (15.8 points, 11.2 rebounds) gives Ole Miss the advantage on the interior against a Mississippi State team that’s next to last in the SEC in rebounding margin, leaving the Rebels to contend with the Bulldogs’ talented guards. Sophomore Quinndary Weatherspoon is the Bulldogs’ top scorer at 17.6 points a game while sharpshooting freshman Lamar Peters is next at 12.1 points.

Both are shooting better than 43 percent from the 3-point line for the Bulldogs, whose collective 46.2-percent clip from the field is third-best in the conference.

Ole Miss’ backcourt continues to struggle with its consistency. Deandre Burnett shot 1 of 10 from the floor against Baylor to drop his field-goal percentage below 35 percent for the season while Cullen Neal scored 13 points in his first start since Jan. 3 but committed a pair of crucial turnovers in the final two minutes.

“(Burnett) was in our program last year, and his role has obviously changed from being a practice player to being a game guy and a guy that I thought would get all-league votes this year,” Kennedy said. “It just hasn’t been as seamless as I would’ve hoped. We’ve got to keep working with him.”

Freshman point guard Breein Tyree kept Ole Miss close in the second half with Saiz battling foul trouble, scoring 18 of his career-high 20 points after halftime. Tyree, who had reconstructive knee surgery last spring, is averaging 10.2 points with 15 assists against just seven turnovers since re-entering the starting lineup five games ago.

“As the season goes on, I’m getting stronger and I’m getting more confidence in my knee,” Tyree said. “It’s also a learning experience. This game’s faster than in high school. Every game, it’s a new opportunity for me to learn.”

Rasheed Brooks, playing for the first time since suffering a seizure against Tennessee on Jan. 17, scored two points and had three assists in 14 minutes against Baylor. Ole Miss will need as many contributions as possible Tuesday in a game that means a little bit more on both sides.

Ole Miss’ upset bid comes up short against No.…