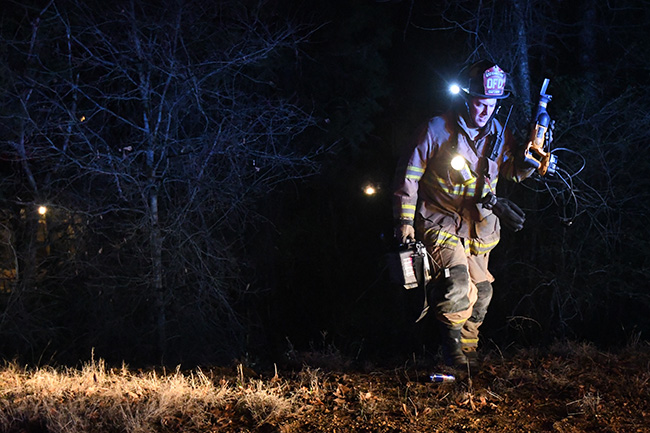 Oxford firefighters take equipment back to their trucks after responding to a car wreck at the southbound exit on Highway 7 and Sisk Avenue in Oxford, Miss. on Saturday, January 28, 2017. The driver of the car was extricated from the vehicle after it left the ramp, knocked over several trees, and came to rest upside down.

The popular television show, COPS, first aired in 1989 and is one of the longest running TV shows to date. Viewers can “ride along” with police officers in cities all over the world and watch what people really do when the cops come for them.

The Oxford Police Department also offers citizens a glimpse into what happens when the sun goes down in Oxford through its virtual ride-along on Twitter.

The latest #RideWithOPD started at 6 p.m. Friday and lasted through the night shift, ending at 6 a.m. Saturday.

Lt. Hildon Sessums was the one at the Twitter helm. Seeing the response other police departments were getting on social media a few years ago, he brought the idea of increasing OPD’s presence and doing the virtual ride-alongs to Chief Joey East.

“We try and do one of the ride-alongs once a quarter,” Sessums said. “I wish we were able to do them more often and maybe we can one day.”

Sessums said the feedback has been “overwhelmingly positive.” OPD now has more than 28,000 followers on Twitter from all over the country.

“We do this for a few reasons,” he said. “The first reason is to open a dialogue within the community. All to often people see police officers as unapproachable. This gives people the opportunity to interact with a police officer and show them that we are human just like them. Another reason is to show what we actually deal with in the Oxford community. This ‘little town’ has a lot that goes on that a lot of folks just don’t know about. It gives them a chance to see it.”

Friday night started off with a wreck on Highway 6 just shortly after the night shift officers hit the street. The first arrest of the night was someone driving on a suspended license.

A few hours into the shift, things picked up for OPD with a food delivery driver being arrested for drug possession, a hit and run wreck and a vehicle wreck.

After the bars closed, OPD responded to several loud music complaints and made a few arrests for people being drunk in public and doing not-so-smart things, including doing lines of cocaine on an air conditioning unit and urinating on a magnolia tree on the Square.

Officers responded to a local hotel to investigate a report of a “flasher,” and a report from an Uber driver who said his passenger was throwing things at his vehicle and urinating in it.

On occasion, some Tweeted things to the police, asking questions, posting their selfie photo with one of the OPD horses or even criticizing the police for “harassing college students,” to which OPD replied, “Hey why don’t college students start taking some personal responsibility and don’t do dumb stuff?”

One individual thought it a good idea to Tweet to OPD that they were “arresting people who had more education than them.”

“So says the person who has an open warrant with us. Wanna tell that to us in person?”

Nothing more was said, and the Twitter page for the person who made the comment no longer exists.

OPD ended its virtual ride-along responding to a woman passed out at IHOP.

Sessums said officers filed 40 reports at the end of the shift.

“It was a typical Friday night with Ole Miss in session,” he said Saturday.