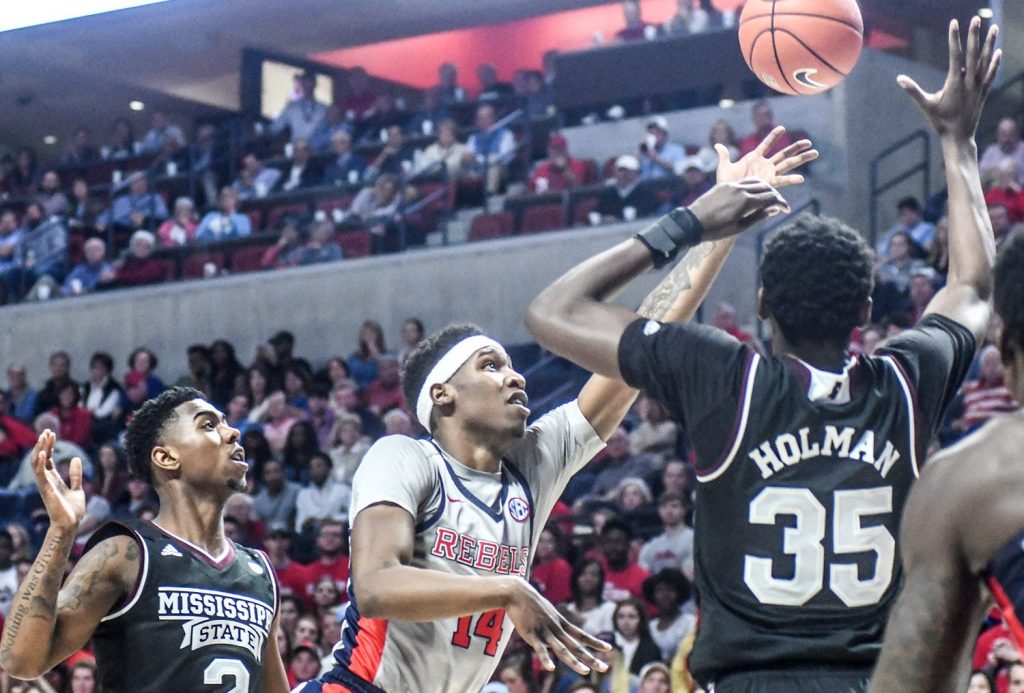 Ole Miss got back to its formula Tuesday and kept the wins coming against its biggest rival.

Ole Miss went ahead early against Mississippi State and rarely let up, salvaging its three-game homestand with an 88-61 win at The Pavilion. It’s the Rebels’ sixth win in the last seven matchups between the teams and their fifth straight at home in the series.

“It’s big, man,” Ole Miss guard Terence Davis said. “If we would’ve lost this game, who knows what you would hear or what you would see on social media. It’s a big win. It’s always fun to beat your in-state rival.”

Sebastian Saiz recorded his 15th double-double of the season with 17 points and 11 rebounds but got plenty of help from the Rebels’ guards for a change. Davis scored a game-high 18 points in 28 minutes of turnover-free ball, Deandre Burnett had 16 points and Rasheed Brooks added 15 points for the Rebels (13-9, 4-5 Southeastern Conference), who shot 44.1 percent from the field and 88 percent from the free-throw line.

Justas Furmanavicius grabbed 10 boards to help Ole Miss finish plus-13 (43-30) on the glass after getting outrebounded by 26 last week against Texas A&M and Baylor. The Rebels also forced 19 turnovers while committing just eight, the second straight game Ole Miss has had single-digit giveaways.

“It just shows what we’re capable of if we take the right approach,” Ole Miss coach Andy Kennedy said. “We defended, we rebounded, we didn’t turn it over, we turned our opponent over, we got contributions from a number of people. This is the formula by which I hope we can play moving forward.”

Mississippi State, playing without senior point guard I.J. Ready (calf), got 16 points apiece from guards Quinndary Weatherspoon and Lamar Peters, but no other Bulldog finished in double figures. Weatherspoon, who came in averaging more than 17 points, had just five points after halftime as Ole Miss held Mississippi State (13-8, 4-5) to 39.6 percent from the field, including just 3 of 13 from the 3-point line in the second half.

Brooks, in his second game back from the seizure he suffered against Tennessee earlier this month, was the catalyst early, shooting 4 of 5 from the field and 3 of 4 from the 3-point line in the first half on the way to his highest point total since scoring 15 against Kentucky on Dec. 29. Ole Miss led by nine midway through the first half and went on a 22-4 run after Mississippi State got within one on its way to a 51-33 halftime lead.

“I thought (Brooks) really settled into a rhythm and made big shots for us,” Kennedy said. “He was the difference. I think the score was 29-28, and he knocked down a couple 3s. We got some stops, and the next thing you know, we got in to double figures.”

Brooks accounted for half of the Rebels’ makes from 3-point range on a night when Ole Miss shot just 26 percent (6 of 23) from deep, but the Rebels continued to attack the basket to keep their distance. Mississippi State got within 10 midway through the second half, but the Rebels answered with a 12-0 run to take control for good with 7:59 left.

Burnett was 4 of 11 from the floor, made all seven of his free throws and had five assists while Davis made six of his seven two-point shots, most of those buckets coming at or near the rim. Freshman Breein Tyree had just seven points but matched Davis’ four assists.

“They were driving, and we couldn’t stay in front of the basketball tonight,” Weatherspoon said.

Ole Miss will head to Vanderbilt on Saturday for a 2 p.m. tip.

Watch Ole Miss coach Andy Kennedy talk about the win in the video below.