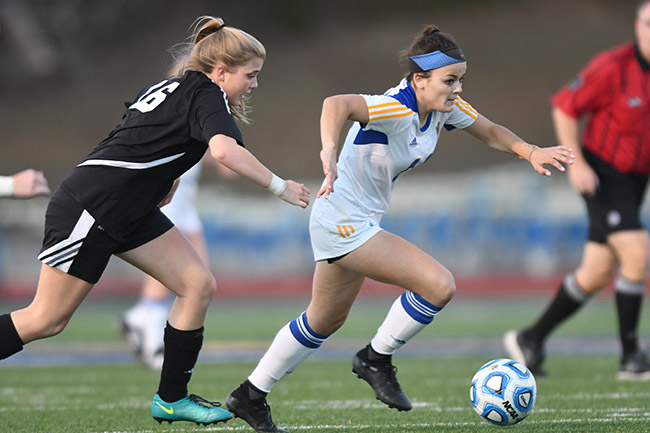 The historic season for Oxford High’s soccer programs continues as for the first time in program history both teams will be playing for a state championship after sweeping Germantown in the MHSAA Class 5A North Half championship games at Bobby Holcomb Field on Tuesday night. The boys’ team punched their ticket for their first state title appearance since winning it in 2013 while the girls are making their second consecutive trip.

Germantown learned the hard way that if you keep Oxford around, they will make you pay. The Mavericks discovered the bitter truth as Oxford’s girls defeated them 6-1 for their second straight MHSAA Class 5A North championship. The Chargers will have a rematch of last year’s state title game against West Harrison on Saturday at Madison Central High School at 4 p.m. West Harrison defeated South Jones 3-0 for the South title Tuesday.

The win also moves Oxford (18-0) one step closer to a perfect season, something neither soccer program has ever accomplished.

Saturday’s second-round match against Grenada provided tense moments for Oxford, but Tuesday’s match with Germantown (14-5-1) was even more pressure packed. The Mavericks controlled possession on Oxford’s half of the field the majority of the first half, but the Chargers capitalized on early chances. Oxford found open space against the Maverick defense, allowing Morgan O’Connor to find herself a window and place the ball in the net for the 1-0 Oxford lead in the eighth minute. Three minutes later, Oxford earned a penalty kick opportunity, which O’Connor cashed in for her second goal of the night and a 2-0 Oxford lead.

“We knew this was going to be a good game,” Oxford head coach Hunter Crane said. “We knew (Germantown) was going to come out and challenge us for 80 minutes and they did. … They were doing some things that we were able to counter against. We were really happy they were doing those things, and our defense played real strong the whole time.”

The lead was cut in half minutes later after the Chargers were called for a handball in their own goalie box, awarding Germantown a penalty kick that Mattie Lewis deposited into the net for their lone goal of the match in the 18th minute.

The game stayed within one goal for the first 20 minutes of the second half until Grace Anne Joyce gave the Chargers some breathing room with a goal in the 59th minute off an assist by O’Connor. O’Connor recorded her third and fourth goals in the 67th and 79th minute, respectively. Ally Shinall added the final goal as time expired for the winning margin.

“We just controlled the ball in the middle a little bit better,” Crane said of the second-half performance. “We were running and they were pressing up trying to score, and that left some gaps open.”

After being eliminated by Germantown the previous two seasons, the Oxford boys finally exacted some revenge on the Mavericks with a 3-1 victory to reach the state championship match for the first time in four seasons. The Mavericks sent Oxford home in the second round last year and in the first round during the 2015 season.

Oxford will face West Jones, which defeated West Harrison 2-1 to win the South title on Tuesday, in the 5A championship immediately following the girls’ game at Madison Central on Saturday.

It appeared it would be Oxford’s night early as the Mavericks gifted the Chargers (17-2) with an own goal to fall behind 1-0 in the eighth minute. The lead swelled five minutes later when Oxford earned the next goal themselves off a shot by Keaton Calhoon for the 2-0 lead.

Germantown got one of the goals back when Cody Dinkelaker scored in the 19th minute. Oxford would hold on to the 2-1 lead heading into halftime.

Most of the fireworks took place early in the match, causing tense moments in the second half, but the Chargers got much-needed insurance when Preston Huggins scored in the 57th minute for the winning margin.

“I dedicate this to the seniors because we should’ve won (state) last year,” Oxford senior midfielder Cole Calhoon said. “It feels amazing (eliminating Germantown). Everyone was a little nervous, but I was ready for payback. It was meant to be.”