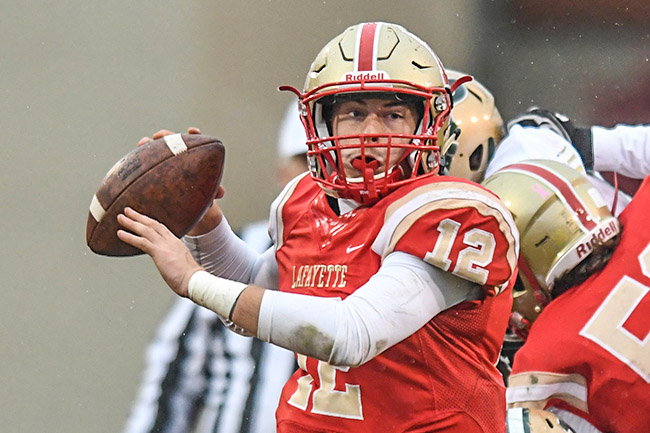 Lafayette High quarterback Will Ard (12) looks to pass against Poplarville in the MHSAA Class 4A state championship game, at Davis-Wade Stadium in Starkville, Miss. on Saturday, December 3, 2016. Ard has signed to play football at Northeast Community College.

The Lafayette High football team put a bookend on their state championship season Wednesday morning when a handful of Commodores signed to play at the next level on National Signing Day. Four of the five will play at the junior college level while one will fight for his spot as a preferred walk-on at Ole Miss.

“This class is very special,” Lafayette head coach Michael Fair said. “We knew that going in. This senior class has welcomed me and my family and done every single thing that I’ve asked them to do. Just had a wonderful and these guys that signed (Wednesday) are just a small fraction of the team picture of how everything happened today.”

A trio of Commodores will continue to be teammates as quarterback Will Ard, Tay Tay Owens and Corey Williams all chose to play for Northeast Mississippi Community College in Booneville for the next two seasons.

Ard, who transferred from Pontotoc two years ago, helped lead Lafayette to a state championship and earned the MVP of the 4A state championship game against Poplarville last December. NEMCC was a school that had Ard’s attention all season and the feelings were mutual.

“They were just loyal to me and I felt like I should be loyal to them,” Ard said. “That’s just a great program to win and have a good education as well. …Right before the season started I got a phone call and they offered. I just kind of followed them as a program. They produce a lot of people to the next level.”

Ard, who also plays baseball at Lafayette, said Northeast might be interested in his skills on the diamond as well, but would give that some thought when, and if, he was given the opportunity to be a dual athlete.

After playing on both sides of the football his senior year with Lafayette, Owens is getting the chance to become exclusively an offensive player when he arrives at Northeast this summer. The Tigers have welcomed Lafayette players regularly, which was something Owens appreciated and wanted to continue that tradition with his fellow teammates this year.

Standout offensive lineman Matt Toles decided to head South and take his talents to Scooba and East Mississippi Community College. The senior always felt the Lions was the team he wanted to join after taking his official visit, but also had offers from Itawamba Community College as well as Northeast Mississippi. There is opportunity for Toles to instantly make an impact with EMCC as they are losing five offensive lineman from last year’s roster.

“(The coaches) said I’m going to be given the greatest opportunity to come in and start right away,” Toles said.

It is hard to not be aware of the national attention EMCC has garnered with the Netflix documentary ‘Last Chance U’, which will be airing a second season sometime this year, and Toles knows he could be seen not only on the football field, but also on the television screen by his friends and family if more seasons are picked up by the streaming giant.

“(Tole’s) hair is going to make him a movie star,’ Fair said laughing.

Ole Miss lost out on some key defensive help on National Signing Day, but they may be getting a diamond in the rough on the defensive front as Lafayette’s Amani Johnson accepted a preferred walk-on spot with the Rebels on Wednesday.

The senior defensive end took a visit during the Wofford weekend and was offered the walk-on spot by Freeze shortly after.

“I don’t necessarily know what my role will be on Day 1, but I do plan on hopefully making an impact,” Johnson said. “Hopefully I can be able to create a spark somehow.”

Johnson’s contact during the process was then-defensive line coach Chris Kiffin before the transitions took place with the Ole Miss coaching staff that resulted in Kiffin’s departure to join his brother Lane at Florida Atlantic. Johnson held firm with his decision to accept the walk-on spot with the Rebels after it was announced Wesley McGriff would become the new defensive coordinator.

“I’m pretty excited about the new coaches,” Johnson said. “I have a pretty positive outlook on new coaches in general. Truthfully I don’t know much about him but my parents like him, so hopefully I’ll feel the same way.”