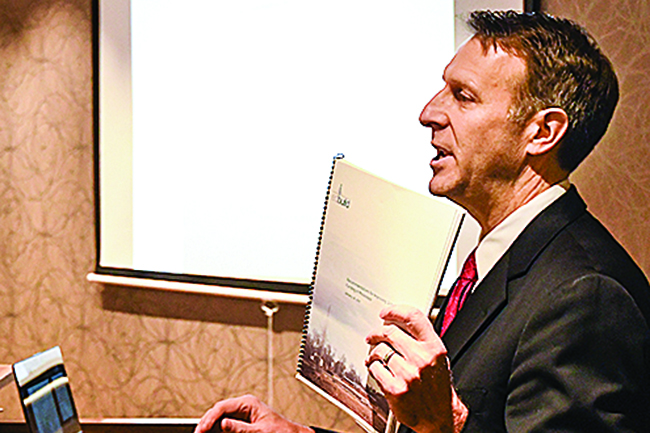 Mississippi state senator Gray Tollison speaks about EdBuild at the Oxford-Lafayette Chamber of Commerce's Eggs and Issues, in Oxford, Miss. on Monday, January 23, 2017.

Lt. Gov. Tate Reeves said Wednesday that he expects to see “some narrowing of ideas” about a new public school funding formula before the end of March.

“If we get something done, it will be something that is similar to the student-focused and student-centered formula that has been recommended,” Reeves said, referring to a proposal made Jan. 16 by the New Jersey consulting firm EdBuild.

The lieutenant governor’s comments came after legislators acted Tuesday to ensure a new school funding formula could be instated this year but revealed no details about what it might look like.

Bills go to conference committee at the end of March. The Legislature is scheduled to adjourn the 2017 session on April 2.

Several legislators have expressed worry that there won’t be a complete bill until very late in the session, which might not give them enough time to read through and vote knowledgeably on the bill.

On Tuesday, two legislative committees passed “dummy bills,” or bills bringing forward the code sections of the Mississippi Adequate Education Program, the state’s current school funding law. The move made it possible for lawmakers to amend the law in the future despite having no specific changes to the funding formula ready by committee deadline day.

Legislation goes to conference committees when a bill is returned by either house to the other with amendments, and the house where the bill originated does not agree with the changes. A conference committee is made up of three members from both the Senate and House, appointed by Reeves and House Speaker Philip Gunn respectively, who attempt to come to a resolution.

Rep. Richard Bennett, R-Long Beach, presented the placeholder bill to the House Appropriations Committee on Tuesday. He told reporters afterward that he wants to ensure no school districts lose money or have to raise property taxes to compensate for a loss in state funding.

EdBuild CEO Rebecca Sibilia told legislators that the state bears a higher percentage of school funding than in surrounding states and that contribution should be examined. While she did not explicitly advise local districts raise their taxes to compensate, it is unclear what other options are available for districts.

Several legislators and members of the public have criticized the process by which EdBuild was hired and their recommendations developed, saying there weren’t enough public hearings and that the Legislature continues to craft its plans behind closed doors without public input.

Sen. David Blount, D-Jackson, is one of those lawmakers.

“It’s also just as important to hear from teachers, parents, principals, superintendents and school board members to get their input” before legislation is passed, he said.

Blount said he is not comforted by the possibility of a phase-in of any new funding formula.

“Anyone who claims there’s been some kind of secretive process really has nothing else constructive to say,” Reeves said. “The fact of the matter is the original recommendations were made weeks ago, so that’s obviously going to be the starting point.”

It has also been unclear who is actually crafting the legislation in question. Even Bennett, who brought the bill before the Appropriations Committee on Tuesday, told a Democratic committee member, he had “as much input as you have.” He then said he was bringing several recommendations to the leadership.

Rep. John Moore, R-Brandon, told Mississippi Today that any school funding legislation would come straight from the office of the Speaker.

“Whatever they push down to the appropriations chairman will be in the bill,” Moore said. “He and the Lieutenant Governor have directed the flow up until this point.”

Gunn’s Chief of Staff Nathan Wells said this is a collaborative process, and the Speaker has been consulting legislators each day on how different recommendations would impact their school district.

Wells also said EdBuild is continuing to run numbers based on different scenarios, but no final decisions have been made.

Sen. Gray Tollison, R-Oxford, spoke about the funding formula to a group with the Mississippi Economic Council Wednesday morning. He said problems with the MAEP range from inaccuracies in identifying funding which students are “at risk” to holdovers from when the law was first passed in 1997 that are no longer needed.

One holdover, he pointed out, is a provision that was put in the MAEP when it first passed that school districts would be funded based on their 2001-2002 school year student numbers. The point of the provision was to ensure no school district was disproportionately punished early in the adoption of the MAEP.

But even now, six school districts are receiving funding for students that are not actually enrolled. In Moss Point, for example, the district is being funded at the level of 4,080 students, when the district’s actual average daily attendance is only 1,868.

Tollison also cautioned people from looking at a new formula as an immediate transition for school districts.

“Anything that’s done will be phased in. Their (EdBuild’s) recommendation is to phase it in over 5 to 8 years. And they also recommended … that school districts would lose no more than 3 percent (of current funding) and at the top range gain no more than 8 percent as it’s phased in over a number of years,” he explained.

Both House and Senate bills bringing forward the MAEP code sections are now placed on the calendar to be debated on the floor of the respective chambers.