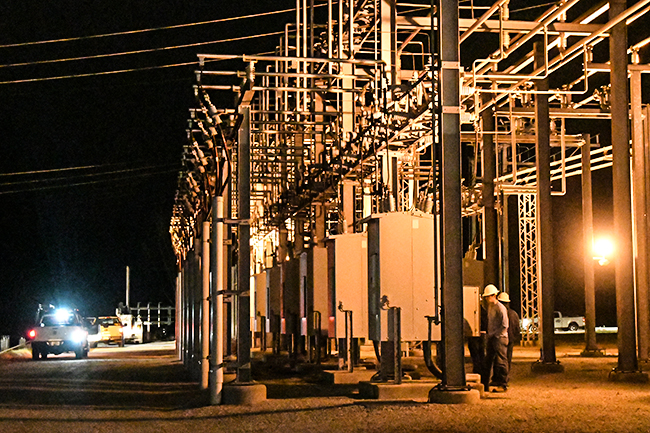 More than 15,000 Oxford, Lafayette County and University of Mississippi residents were without power Thursday night after a Tennessee Valley Authority equipment failure in the Old Taylor Road substation, according to the Oxford Electric Department.

“It’s my understanding that North East Mississippi Electric Power Association also lost all customers fed from this substation,” he said.

The substation is jointly owned by Tennessee Valley Authority, North East Power and the city of Oxford Electric Department, and it supplies electricity to many areas in the central part of Oxford as well as Highway 7 South, Thacker Heights, Sardis Lake Road, Old Taylor Road and the University of Mississippi.

Neely said power has been restored to all OED customers.

“TVA has tracked down the cause of the outage and it appears to have been caused by a failed lightning arrestor, which is used to protect Oxford Electric and North East transformers from lightning,” Neely said this morning. “Our engineer and North East engineers were in constant contact with TVA dispatch, and as soon as power was restored to the breaker, we began gradually restoring power. We were concerned that if we restored it all at once, with all of the electric load on a cold night, the power restoration effort might fail or be delayed.”

NEMEPA Executive Director Keith Hayward said power has also been restored to its 11,491 customers and crews are working on repairing the lightning arrester.

Many took to social media once the outage occurred, coining the phrase “Oxford Outage 2017.” The Oxford Police Department entertained folks with comical Tweets and even University of Mississippi Chancellor Jeffrey Vitter joined in the fun when asked on Twitter if the outage would cause classes to be canceled today.

“Good try, but power & wifi are back, so classes will go on. I’m thinking we may do a weekly power outage. Was fun to dine by candlelight,” Vitter Tweeted at 9 p.m.

The power coming back on may have also caused tornado sirens to go off at around midnight.

County Emergency Management Coordinator Steve Quarles said he is aware that one or more tornado sirens were activated at about midnight but is still unclear if the sirens were in the city, county or on campus.

“We’re in the process of isolating which ones went off,” he said this morning. “I do know it’s related to the power coming back on.”