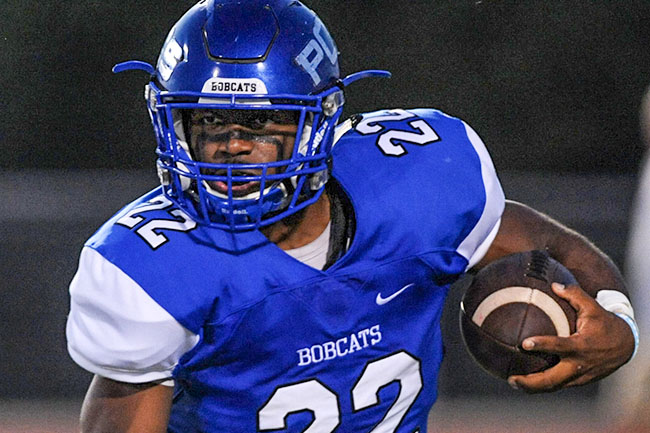 Presbyterian Christian School running back Isaiah Woullard has signed to play at Ole Miss. The Hattiesburg, Miss. player is the leading rusher in Mississippi high school history with 8,294 yards.

It’s normal for coaches to gush about their recruiting classes.

Considering the circumstances, Hugh Freeze had more reasons than usual to have the warm and fuzzies about Ole Miss’ latest batch of newcomers.

“It was a very difficult time,” Freeze said. “A lot of rollercoaster rides in the recruiting process this year, probably more than others even though it’s always part of it. But with our other issues, it made it very, very difficult.

Ole Miss signed 22 prospects in its 2017 class Wednesday, though the group lacked the star power of Freeze’s previous classes with the cloud of the long-running NCAA investigation hovering over the program.

The Rebels had one of the nation’s top 15 classes each of the previous four years but finished outside the top 25 of every major recruiting service’s team rankings. Yet Freeze said his team got what it needed from a class that’s smaller than usual because of scholarship reductions as part of the penalties the school self-imposed last year.

“I think we addressed a lot of needs that we have,” Freeze said.

The priority, Freeze said, was addressing a defense that needs fixing after Ole Miss finished among the nation’s worst in several categories. Five linebacker signees show the help the Rebels need at the position, though Freeze said early enrollee Breon Dixon could play safety.

The Rebels signed reinforcements at safety in C.J. Miller, a former USC commit, A.J. Harris and Clinton’s Kam White, who could make an early impact with his rangy 6-foot-2 frame.

Morton four-star athlete D.D. Bowie, the Rebels’ highest-ranked signee, stuck with his commitment after a late push from Mississippi State. He’ll use his 6-1, 187-pound frame at cornerback and may also get a look at returning kicks, Freeze said.

“D.D., we think, is as athletic as any kid that’s come out of this state since I’ve been here really,” Freeze added.

“If he were playing in a different league, I think he’s a no-brainer,” Freeze said. “I’ve got a sneaking suspiscion he’s going to be like an Evan Engram type that you look at after three years and you’re like, ‘Wow, we almost messed that up.’”

But Freeze expressed gratitude for the ones who did sign after having to listen to what he called “extreme rhetoric” from others about what additional fallout may come from the NCAA probe.

“Yet they and their families found this place to be the best fit for them under those circumstances, and for that, I will always be indebted to this group,” Freeze said.