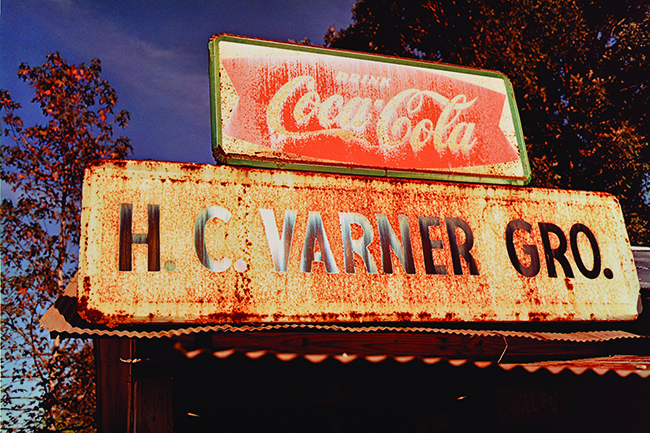 HC Varner Grocery (1971) is among the photos of well-known photographer William Eggleston in an exhibit at the University of Mississippi Museum that will be on display through Feb. 18.

Art and photography lovers have a little more time to visit the University of Mississippi Museum’s exhibit “The Beautiful Mysterious: The Extraordinary Gaze of William Eggleston” with an enhanced experience through both a film screening and lecture to support it.

The exhibit will remain on display through Feb. 18 in conjunction with the programs, presented in partnership with Friends of the Museum. Additional support was provided by the University Lecture Series.

Anne Tucker, scholar and curator emerita of the Museum of Fine Arts in Houston, will deliver a lecture on Eggleston’s work at 7 p.m. Feb. 9 in the speakers’ gallery at the University Museum.

In conjunction with the Oxford Film Festival, the museum presents a free film screening of “William Eggleston in the Real World” at 6 p.m. Feb. 14 at the Lyric Oxford, followed by a discussion by filmmaker Michael Almereyda.

Tucker, who has a particular interest in Eggleston’s work, will offer two opportunities to discuss the exhibit. Besides the evening lecture on Feb. 9, she will conduct a daytime gallery discussion for art, photography and documentary studies students.

In an essay about the exhibit, Tucker recalled the first time she laid eyes on Eggleston’s photographs at the Museum of Modern Art in New York City in 1976.

“A woman next to me in the MoMA exhibition exclaimed that his pictures were ‘exotic,’” she said. “I call them home.”

Tucker grew up in Louisiana, making numerous trips to the Mississippi Delta with relatives.

“It is impossible for me to look at some of Eggleston’s pictures and not recall those memories,” she said. “I can’t be objective, whatever that means.

“There are many of Eggleston’s pictures that are fresh, engaging and, at times, disturbing, but which evoke in me no identity with his world. Other images preserve scenes that are gone and situations that needed to be gone. Above all, he also stopped to see – really see – that life is so daily.”

Almereyda, film director, writer, producer and cinematographer best known for his modern-day adaptation of “Hamlet” starring Ethan Hawke, will attend the screening of “William Eggleston in the Real World.” He will also be available for a brief Q&A session at the conclusion of the screening.

In this film, Almereyda explores the connection between Eggleston’s mysterious personality and industry-changing work, in addition to revealing his parallel commitments as a musician, draftsman and videographer.

For more information about these events, visit http://museum.olemiss.edu/.