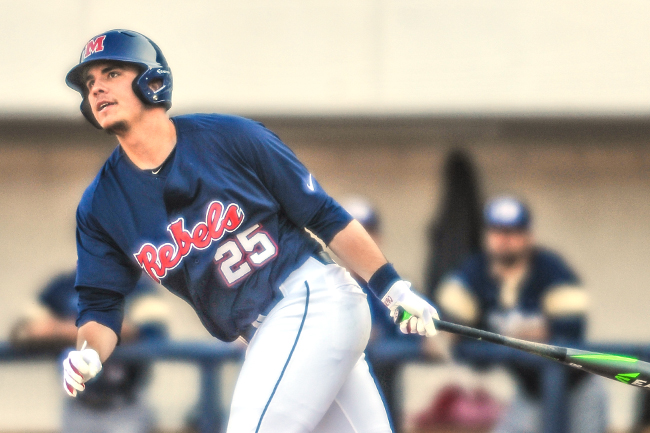 The only player still around from Ole Miss' 2014 College World Series team, third baseman Colby Bortles enters his senior season as a veteran presence on a roster with just eight upperclassmen. (Bruce Newman).

Ole Miss has played 118 games and practiced too many other times to count since its last appearance in the College World Series.

Colby Bortles has been around for them all.

Bortles is the lone holdover from the team that finished fourth in Omaha in 2014 and is just one of two seniors on this year’s team along with pitcher Sean Johnson, a junior college transfer who’s played one full season for the Rebels to Bortles’ three. Entering his third season as the full-time third baseman, Bortles is Ole Miss’ old man on a roster littered with young talent — a seasoned role he’s eager to take on.

“I’m looking forward to being a leader on this team and taking us to Omaha,” Bortles said.

Those words often translate into action in practice for Bortles, who’s doing his part to bring along the youngsters, including the freshmen that made up the nation’s No. 1 recruiting class. Bortles takes the time to answer questions from the newcomers and gives them as many words of advice as he can muster.

“All the freshmen, we talk and hang out together. They’re my brothers,” Bortles said. “They ask me different stuff like, ‘What’s it going to be like in the season when this happens and this happens?’ I just try to give them the best advice so when that stuff does happen, they’re not just stranded there and don’t know what to do.”

Bortles can play, too.

A third-team preseason All-America selection by Collegiate Baseball, the 6-foot-5, 225-pound Bortles will be counted on to help replace the middle-of-the-order production lost with the departure of J.B. Woodman after hitting .269 with 50 RBIs and a team-high 21 doubles a season ago. His eight home runs are the most among returning players.

Bortles struck out a team-high 59 times, but only Woodman drew more walks than Bortles’ 31. An altered approach at the plate and rigorous offseason workouts with strength coach Ben Fleming have Bortles believing he can improve all his numbers.

“I feel stronger,” Bortles said. “My hitting plan is different. I’m not trying to look for that one pitch anymore. Just trying to get a pitch elevated and see what I can do with it.”

With numerous position battles going on and a weekend rotation that still needs some clarity before the season opener against East Carolina on Feb. 17, what the Rebels will get from their most experienced player is the least of head coach Mike Bianco’s worries.

“He’s the guy that reached the pinnacle of college baseball,” Bianco said. “Besides the statistics of his play on the field, his leadership and what he means in the dugout and locker room probably means more.”

Bortles is willing to do whatever’s needed to help Ole Miss get back. The Rebels have combined to go 0-4 in their last two regionals.

“No one wants to go 0-2 when you’re hosting your own regional,” Bortles said. “I think when you talk about it, you have more of that motivation to work harder, get better and do different stuff to get better and not go 0-2 again.

“I think my role every year is to do what I’m supposed to do to take this team to Omaha.”