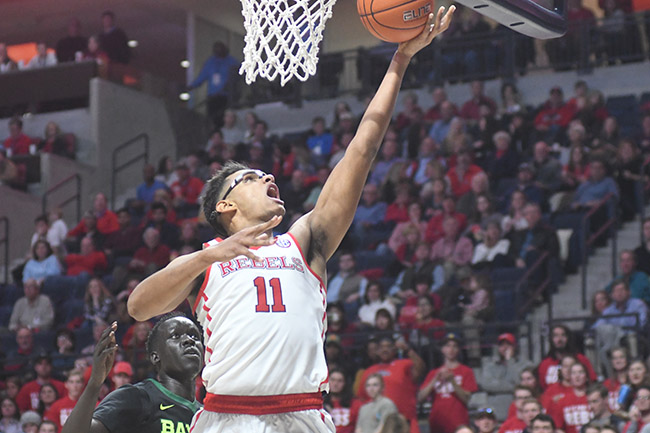 Sebastian Saiz played on Ole Miss’ last NCAA Tournament team, so the senior forward is qualified to speak on what it takes to get there.

For this year’s team, one that’s not all that close to that conversation with the calendar flipping to February, the approach, Saiz said, has to be the most elementary of them all.

“I think going one game at a time is the best option we have,” he said.

Ole Miss salvaged its three-game homestand Tuesday with a runaway win over Mississippi State, but it was just the fourth win in the last 10 games for the Rebels (13-9, 4-5 SEC). Ole Miss will start the second half of its Southeastern Conference slate Saturday at Vanderbilt (2 p.m., ESPNU) needing them in bunches to make any real run at an-large berth.

It’s either that or run the table in the SEC Tournament next month if Ole Miss doesn’t want to miss out on the NCAA Tournament for the second straight year, but the Rebels are more worried about trying to start just their second winning streak in league play.

“I think when the team starts thinking about the big picture, they forget about the single games,” Saiz said. “We’ve just got to focus on one game at a time, put our head down. … Once we get to March, pull our head up and see where we’re at.”

Ole Miss doesn’t have any crippling losses with all them coming against top-90 RPI teams, but that’s a lot of wins the Rebels don’t have either. Ole Miss is just 1-8 against the RPI top 50 and 3-9 against the top 100, but the Rebels get a chance to improve on those numbers against the Commodores (11-11, 4-5), who have won three of their last four games to jump to No. 48 in the NCAA’s latest RPI rankings.

Vanderbilt gets it done from deep with the SEC’s best 3-point field-goal percentage. Sophomore Riley Lachance is the league’s top 3-pointer shooter at 52.4 percent while Matthew Fisher-Davis, the Commodores’ leading scorer at 15.9 points a game, isn’t far behind (39.3 percent).

“We’ve got to get used to trying to guard the 3-point line and pound them inside,” Saiz said.

Ole Miss was better in a lot of areas against Mississippi State, limiting the Bulldogs to 28 percent (7 of 25) from beyond the arc with its switching defenses and winning the rebounding battle for the first time in three games. The Rebels also kept their turnovers in single digits for the second straight game, a vast improvement for the league’s most turnover-prone team.

“I’m just glad we were able to play better because our teams needs it down the stretch,” Ole Miss coach Andy Kennedy said.