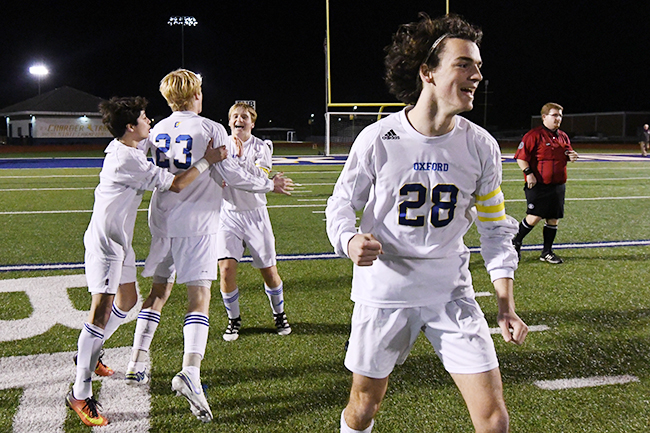 The fact an Oxford High School sports team is competing for yet another state championship is old hat these days. But on Saturday, the Chargers could be bringing home two more titles in a way that has never been done. Both Oxford soccer teams are competing in their respective MHSAA Class 5A championships at Madison Central, which is the first time the boys and girls are playing in the title games in the same season and could win titles together for the first time as well.

Each team is gunning for their second state championship as the boys won in 2013 while the girls claimed their first state title in program history just last February. Each team punched their ticket to Saturday by defeating Germantown in the 5A North State championship Tuesday.

For the girls, they have the opportunity to make even more history than what has already been accomplished. Heading into Saturday’s rematch with West Harrison, the Lady Chargers are 18-0 and looking to be the first of either program to post a perfect season. This is head coach Hunter Crane’s second season at the helm after being hired in the summer of 2015, and he has guided the girls to two consecutive state title appearances.

“I’ve got to give the girls all the credit there,” Crane said of making it back to the state title game. “They bought into the system of what we wanted to do. We talk about family and standing together, and they’ve just done that this whole time they fought. I knew this team could be special. I said it back in the very beginning of the year that this team could do something special.”

The zero on the right side of the win-loss column was never an elephant in the room as Crane and his team never discussed it until right before the playoffs began a couple weeks ago. Even after the topic was broached after a practice, it still has not fazed the players’ mentality one bit as they know what has been at stake during their postseason run.

“I think we’re 10 times better than we were last year,” senior goalkeeper Bailey O’Connor said. “We were like, ‘Look, that zero is staying or we’re going home.’ We’re really proud, and we’re on a really good win steak right now and I hope it continues.”

Playing for more
The school year started with tragedy with the deaths of the six Oxford residents in a fatal plane crash in early August, leaving 11 kids without parents. Those 11 kids have been in the minds of every student, coach, teacher and citizen of Oxford. On top of that tragedy weighing on the players’ minds, the girls’ team has also had to deal with personal obstacles as Ally Shinall’s younger brother, Trevor, as well as Bailey and her sister Morgan O’Connor’s mother battle with cancer. The season has become more than just an 80-minute game on a soccer field.