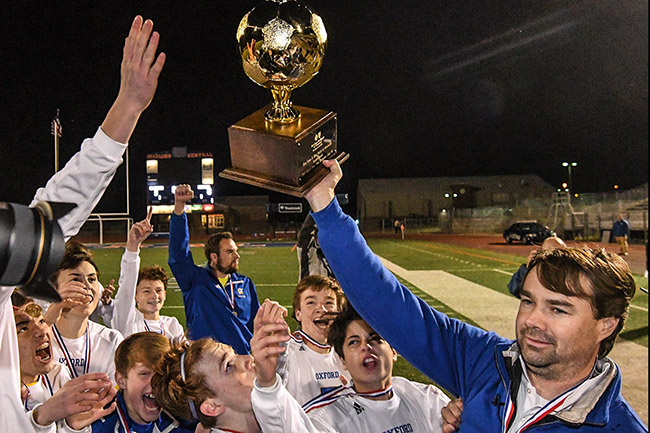 MADISON — Much like the rest of the playoffs for the Oxford boys’ soccer team, good defense was the backbone of their success Saturday.

On multiple occasions, West Jones was unable to make anything of their chances due to the hard-nosed Oxford defense. As for Oxford, they had increased the frequency of the shots and had been getting closer to netting a goal that would put them up and one step closer to being state champions.

Oxford cashed in with a 3-0 win in the MHSAA 5A title match at Madison Central, capping a historic day for the school’s soccer programs. The Chargers’ second state crown gave Oxford’s boys and girls titles in the same season for the first time ever.

In the first half, the Chargers looked to feed Preston Huggins early and often. Oxford sent multiple lead passes in Huggins’ direction, many times leading to a pass to an open player at the top of the box. Unfortunately, the Chargers could not close on any of their attempts. Plenty of Chargers managed to take shots but none of them would find the back of the net, leading to a scoreless first half of state championship soccer.

The second half started with more energy, both teams pressuring opposing defenses until the 45th minute, where a cross from Keaton Calhoon was deflected into the West Jones goal giving the Chargers a one-goal lead.

In the 56th minute, a free kick from Calhoon would hit the crossbar and eventually bounced around to find his brother, Cole Calhoon, in the box to put away Oxford’s second goal. The ball bounced between players attempting to clear the ball until Cole Calhoon collected the ball and fired a strike into the left side of the goal just out of reach of West Jones keeper Jess Cooley.

Unfortunately, the game would not go as cleanly as both teams would have hoped. In the 63rd minute, an altercation between a West Jones and Oxford player would lead to a red card charged against West Jones, forcing them to play one man down for the last 17 minutes of play.

The Chargers would make the Mustangs regret their mistake, and in the 70th minute, Neil Chandler found the top of the net on a goal from a few meters out. With a three-goal lead and the time closing down, Oxford was all but guaranteed their first state championship since 2013.

Through all the excitement, Oxford coach Charles Sabatier still managed to give a quick word about the championship.

“I am extremely proud of the boys tonight,” he said. “We were creative up top, strong defensively, and never gave up. We have had a problem with intensity all season, and this game, they kept it up the entire time.”