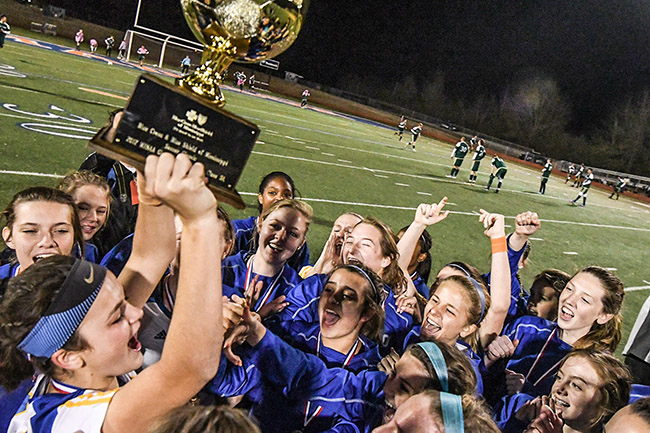 Oxford High's Morgan O'Connor, left, holds up the championship trophy as she and her teammates celebrate the win over West Harrison in MHSAA Class 5A Soccer Classic at Madison Central High School in Madison, Miss. on Saturday, February 4, 2017. Oxford won 2-0. (Bruce Newman)

MADISON — The championship game started off exactly how the Lady Chargers of Oxford wanted. Finishing off the perfect season in style, both the offense and defense proved why the trophy deserved to stay in Oxford for the second year in a row.

Oxford star forward Morgan O’Connor found the net only six minutes into the game. O’Connor gathered a deflected cross, and with a slightly congested look at the goal, she finished from around seven meters out with a clean strike.

From that point on, Oxford would control the momentum throughout the rest of the half. O’Connor managed to play her game and get solid runs possession after possession. She made excellent crosses and important passes, opening up her teammates for great looks while also closing in on her second goal of the match with shots just missing the net.

The Lady Chargers continued to shoot, making West Harrison keeper Haley Lott make important saves. Oxford also capitalized on the weak clearing of the Lady Canes before the halftime break. Oxford forward Grace Joyce intercepted a pass and unloaded a shot from about nine meters that was saved but kept the West Harrison defense on their heels.

The second half mirrored the first half of play with Oxford scoring an early goal. This time, Addison Mills scored on a deflected free kick from right outside the top of the box in the 42nd minute. It was a great shot from Mills, and with a 2-0 lead, Oxford could comfortably cruise to the perfect undefeated season and back-to-back state championships.

West Harrison tried to create opportunities, but the Oxford defense closed in quickly and swallowed up any chances the Lady Canes could muster up. The Charger defense led to offensive and fastbreak opportunities, keeping the pressure on the Lady Canes’ defense. With a little over 20 minutes left in the state championship, Oxford had taken seven second-half shots compared to West Harrison’s zero. The first West Harrison shot came at the 61-minute mark when a shot from about 20 meters out slowly bounced into Oxford keeper Bailey O’Connor’s hands, her first save of the game.

While the Oxford defense was a wall of dominance led by Bailey O’Conner and Maria Jones, Morgan O’Connor, Bailey’s sister, kept the pressure on the Lady Canes defense and never allowed them to rest. In the 68th minute, a Lady Canes defender made a long run down the sideline that ended with a cross and another missed opportunity, the last chance the Lady Canes would have to make a difference in the outcome of the game.

Oxford coach Hunter Crane was excited to play in his second consecutive state championship and believed his team’s energy helped them get a comfortable win.

“We came out with great energy and controlled the game for 80 minutes,” he said. “It is what we talked about, and we got done what we needed to. We controlled possession the entire game, and when we got opportunities on goal, we finished them.”

With this state championship, Oxford moves up to 6A and to that Crane responded, “Let’s go.”