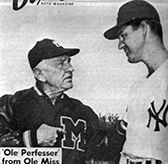 Casey Stengle (left) was born in Kansas City in 1890 and died in 1975 at the age of 85. He loved to play baseball and was known far and wide as a great player.

With the Ole Miss 2017 baseball season about to begin in the middle of this month, I thought I would write about an assistant coach and the Ole Miss team of 1914 that won the state championship. It always amazes me how Oxford and Ole Miss have become home, at one time or another, to many greats in American history. Greats in baseball are not an exception.

I remember Casey Stengel from my childhood. He was an old man in his 60s and 70s and he coached the Yankees and the Mets during ballgames I watched on Saturday afternoons. It was the 1950s and 1960s when Dizzy Dean and PeeWee Reese called the game of the week on television. He was the entertainment that kept the baseball games going between innings — plus he was a good coach, too. He could really get in an umpire’s face and some of his antics became legend.

Casey was born in Kansas City in 1890 and died in 1975 at the age of 85. He loved to play baseball and was known far and wide as a great player. He even came out of a slump in his pro days and helped his team win a World Series by using his batting skills. He used his coaching ability to win pennants and other World Series games.

At one time, his old coach from high school days at Central High in Kansas City asked him to come down to Ole Miss during the offseason and help him coach. As it turned out, it was a few weeks that Casey never forgot and often told stories about. He even got another nickname from it: the “Ole Professor.”

In 1914, Ole Miss coach William Driver was the old coach that called on Casey for assistance. Casey wanted to work on his injured throwing arm before reporting to spring training camp with the Brooklyn Dodgers in Augusta. He got to work on his arm and he also got some first-hand experience in directing other players.

He also used the time to meet some Ole Miss beauties. Casey was not only a coach but he was a man about campus, too.

He would visit the fraternity houses on campus and even date a few of the girls. The coeds thought of him as the handsome pro ball player who had come to coach the Ole Miss boys. He even attended the Mid-Winter Ball put on by the “Outlaw Dance Committee.”

The Mid-Winter Ball was the “most brilliant and enjoyable social function of the season,” reported the Mississippian. The article in the Feb. 25, 1914, issue of the student paper also reported that the “University has always been popular with the society set of Mississippi and her sister states.”

A list of the couples attending the ball included Sallie Murray Wilkins (Aunt Tee’s daughter and William Faulkner’s first cousin and childhood playmate) and C.E. Dorroh. Another couple that was listed was Nina Summerville and J.C. Kincannon. Nina would later marry Dr. J.C. Culley and Kincannon’s father was one time Chancellor of Ole Miss. Casey was paired with a Miss Allbloom (no first name given).

Casey also reported to the campus newspaper reporters that the baseball team players were very good with their feet and the dancing helped them in the game of baseball. He also told the reporter to mention him in the paper and to “Tell ‘em I’m single yet.”

In a biography of Stengel, I found an interesting story about a game he helped coach with LSU in Baton Rouge. The Ole Miss team was a good team and it won the state championship by defeating Millsaps 5-3.

During the game with LSU, there was only one umpire and he stood behind the pitcher’s mound to call the balls and strikes. It just so happens that at this game, the umpire was a former player with the Tigers and he knew the Ole Miss catcher’s signs to the pitcher. He — by some means that Casey detected — would pass the information on to the LSU batter.

Casey informed coach Driver and they quietly changed the signals. When the next batter came up, he took the signal from the umpire and got ready to hit what he thought would be a curve ball. Instead of a curve ball, it was a fastball. From then on the signal-calling change stopped the signal stealing by the umpire.

I mentioned Casey Stengel to some of my younger friends around town and on campus. They vaguely knew who he was, but if you are around my age and maybe a little younger, you remember some of the “master of double talk’s” antics during the game of the week on TV and on variety shows of the 1950s, 60s, and 70s.