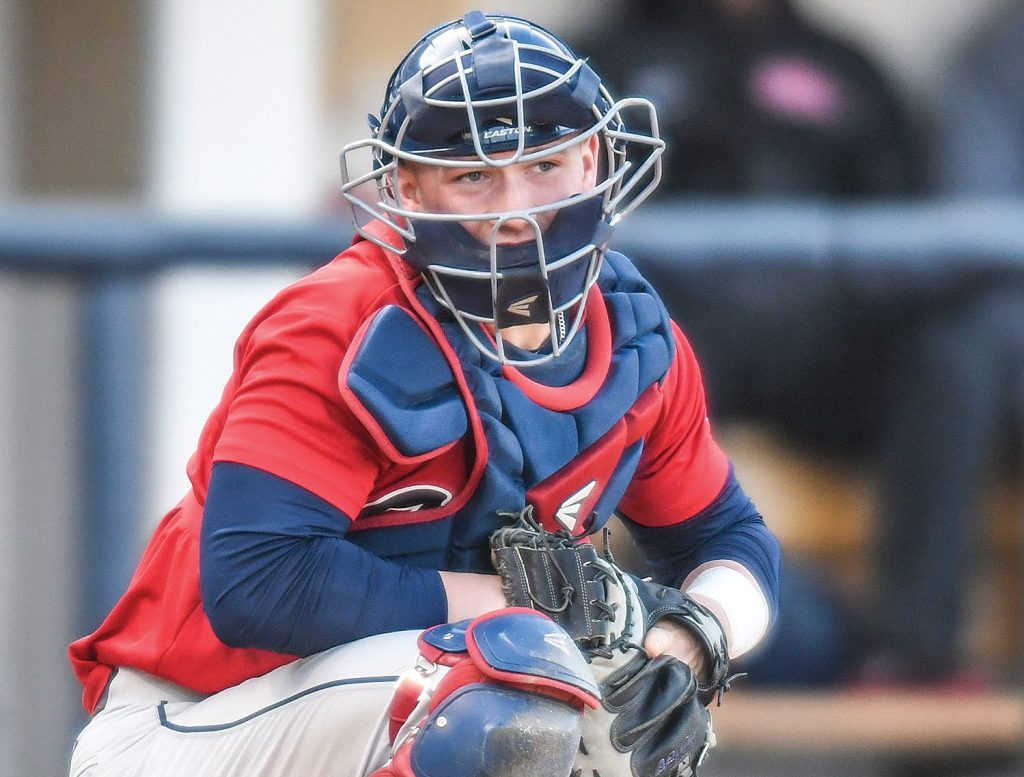 Ole Miss freshman catcher Cooper Johnson looks down to first base during a scrimmage at Oxford-University Stadium in Oxford, Miss. on Friday, February 3, 2017. Known for his defensive skills, Johnson will be the Rebels’ starting catcher when Ole Miss opens the season against East Carolina on Feb. 17. (Bruce Newman)

It’s still hard to believe the best recruiting class in Ole Miss history stayed intact, even for those who were a part of it.

Ole Miss’ 18-member class was tabbed as the nation’s best by multiple publications, becoming the first No. 1 class for Ole Miss in any sport. It consisted of five top-100 high school prospects and five players who were taken in last year’s MLB First-Year Player Draft, but none of them were taken higher than the 26th round with signability becoming a factor.

All of them opted for college instead of the pros, giving Ole Miss an influx of freshmen talent on a roster with just eight upperclassmen that’s already making an impact.

“I’m excited what we can do,” fellow freshman Grae Kessinger said.

Ole Miss coach Mike Bianco has already decided on Kessinger and Johnson as opening-day starters Feb. 17 when the Rebels start the season at home against East Carolina and didn’t think twice about it. Kessinger, the former Oxford High standout, will start at shortstop — the same position his grandfather, Don, and uncle, Keith, played for the Rebels — while Johnson will get the nod at catcher.

“If we didn’t think they could handle it, we wouldn’t put them in,” Bianco said. “There’s enough depth and enough talent on the field that they’ve earned that right. I have no doubt they’re going to be able to step out there, play and contribute immediately.”

Kessinger’s high school teammate, Thomas Dillard, is pushing to be the starting left fielder but could also catch or play in the infield. He’s also a prime designated hitter candidate as the Rebels look to keep Dillard’s power bat in the lineup. His 16 home runs last season at Oxford led the nation.

Georgia product Cole Zabowski is in the mix at first base while Long Beach native Greer Holston along with high school All-Americans Will Ethridge and Ryan Rolison are vying for spots in the weekend rotation. Even if it’s out of the bullpen, all of them are in line to get innings this season.

The group’s work ethic has been as impressive as its collective talent to teammates. Entitlement can set in at times with players who come in with this many accolades, but older players said they’ve noticed a more humble approach from the newcomers.

“It was honestly like they wanted to learn more than they knew everything,” outfielder Ryan Olenek said. “It was the opposite of what you’d think. They came in and were asking questions.

“They came in with a lot of hype around them, and usually kids like that kind of feel like they’re given things, but they’ve earned everything they’ve gotten.”

The buzz surrounding the group off the field will soon give way to their performance on it. Though it may be bigger than most teams, the youngsters just want to do their part.

“We don’t really talk about the No. 1-ranked class really,” Holston said. “We just come out here and do our thing and do what got us here. We play how we expect to play and we all have expectations for the season. We’re just going to fill our roles.”