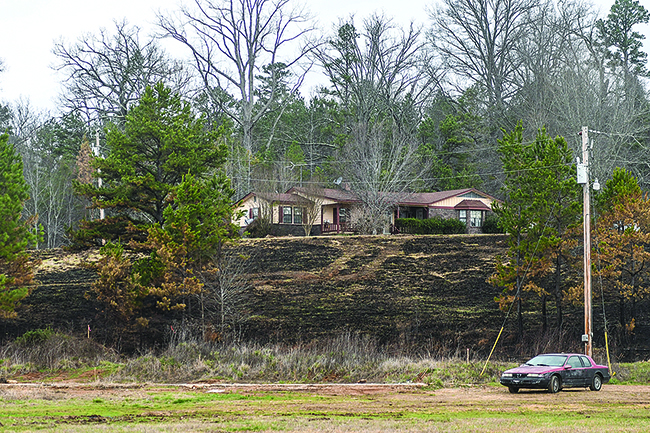 Burned grass from a January 28 fire is near the Pebble Creek development, on County Road 415 near Oxford, Miss. on Tuesday, February 7, 2017.

A public hearing was held Monday night to start the Lafayette County Board of Supervisors meeting centering around the affordable housing development on County Road 415.

County inspector Joel Hollowell informed the board of an incident last week where an unauthorized control burn on the development got out of control and threatened homes in The Lakes subdivision.

Hollowell said that on around 3 p.m. on Saturday, Jan. 28, he was notified that there was an out-of-control fire at the development site, despite the fact the developer had not obtained a controlled burn permit. Hollowell had inspected the site on Friday and again Saturday morning and informed two employees at the site it was not in compliance because it didn’t have adequate water or an operational blower to control the smoke.

Lafayette County volunteer firefighters were able to contain the fire and prevent it from damaging any homes. Hollowell issued the developer, Brantney Cox, a $1,000 citation and a work stop order.

Since then, Cox has met all the requirements to burn the property, according to Hollowell, and the public hearing was necessary to determine if Cox could be issued a burn permit on the recommendation of Hollowell and county fire coordinator Wes Anderson.

Brad Walsh, an attorney representing Cox, told the supervisors the work stoppage “jumped the gun,” and doesn’t believe it was a flagrant violation.

“I don’t think it jumped the gun at all,” said board president Jeff Busby. “The fire came very close to some homes, so I commend Joel for doing the right thing.”

Supervisors were not only concerned with another fire at the development site possibly getting out of control, but also the amount of smoke it will create for residents in the area. Removing the trees rather than burning them on site would create a potential traffic issue on the road many believe is already in need of repairs.

Cox said it would take about three weeks to finish clearing the development and it would cost approximately $40,000 to haul the trees off the site instead of burning them.

“That would be cost prohibitive,” Walsh said for the affordable housing development.

Walsh and Cox left the meeting with the understanding the developer can resume work once the burn permit is issued and must following all of the county regulations.

Pebble Creeks has come under scrutiny since the 60-acre development was first proposed in September of last year.

Cox was granted site plan approval from the supervisors a month ago, appealing his case before the supervisors after being denied by the county planning commission and despite concerns from residents of The Lakes subdivision about inadequate water being provided to the 33-unit development by Punkin Water Association, as well as its location below the Spring Lake dam, which is considered a high hazard dam.

In January, Cox agreed to certain stipulations before receiving site plan approval on the first phase of the development, including raising the units a certain height off the ground.