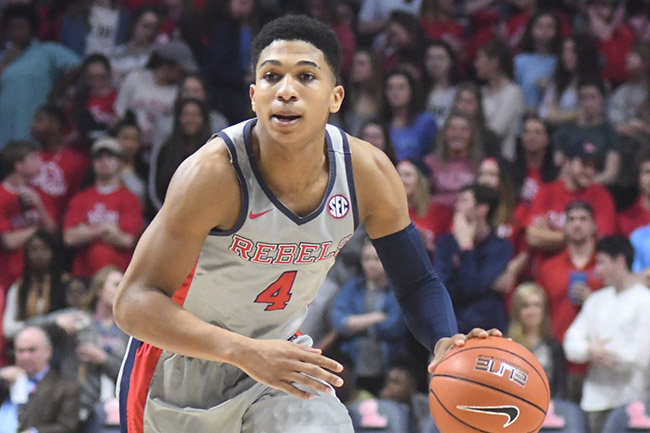 Much to Andy Kennedy’s delight, the list of injuries is getting shorter.

Ole Miss’ coach gets an injury report daily with the most recent ones coming with some welcomed omissions. Deandre Burnett is no longer on it as Kennedy believes Ole Miss’ leading scorer is back to full strength after spraining his ankle last month against Georgia. Neither is Rasheed Brooks, who’s played in three straight games after the seizure he suffered against Tennessee caused him to miss two.

Breein Tyree has been available all season, but the freshman point guard has been brought along slowly while recovering from reconstructive knee surgery last spring. He’s regaining his old form with each passing game, and Ole Miss (14-9, 5-5 Southeastern Conference) may be getting healthy at the right time.

“We’ve gotten back whole from a personnel standpoint,” Kennedy said.

It’s helped the Rebels turn in one of their better stretches of play by getting back to a formula that Kennedy has often referred to as Ole Miss’ best recipe for success — disruptive switching defenses and low turnovers to go with Sebastian Saiz’s double-doubles. Ole Miss will go for its first three-game winning streak in league play Wednesday at Tennessee (5:30 p.m, SEC Network), one of just three top-50 RPI opponents left on the schedule as Ole Miss tries to make a push for an NCAA Tournament berth in the back half of its conference slate.

With the guards as healthy as they’ve been in some time, Ole Miss has been more active in its man and zone defenses, limiting both Mississippi State and Vanderbilt, the SEC’s best 3-point shooting team, to less than 36 percent shooting from deep in wins that came by a combined 34 points. Saiz (15.6 points, 11.4 rebounds) has gotten some help cleaning up misses with Brooks grabbing five rebounds against Vanderbilt and fellow guard Terence Davis pulling down 12 boards the last two games as the Rebels finished them plus-21 on the glass.

“We’re rebounding the ball a little more consistently and as a result we’re giving ourselves a chance,” Kennedy said.

The Rebels have also given themselves more shots by cutting down on their turnovers, something Kennedy doesn’t think is any coincidence with Tyree’s emergence at the point. Burnett, who’s moved back off the ball, has 19 assists and 11 turnovers over the last five games while Tyree hasn’t turned it over more than once during that span. Davis, who’s averaging 16.8 points over the last six games, has just one turnover in the last three games.

The Rebels no longer lead the league in turnovers on a per-game basis after committing just eight in each of the last three games.

“I think it’s as simple as that,” Kennedy said of Tyree taking over at the point. “It brings a primary ballhandler back into the equation, and it allows you to move guys back into their natural positions. A lot of times, we were trying to stick square pegs into round holes just based off necessity. Now that we’ve got a full complement of guards back, I think we’re finding ourselves more efficient offensively.”

Ole Miss would like to keep it going against the Volunteers (13-10, 5-5), whom the Rebels beat at home last month.

“I think right now (Kennedy’s) team is playing as well as any team in the league,” Tennessee coach Rick Barnes said.