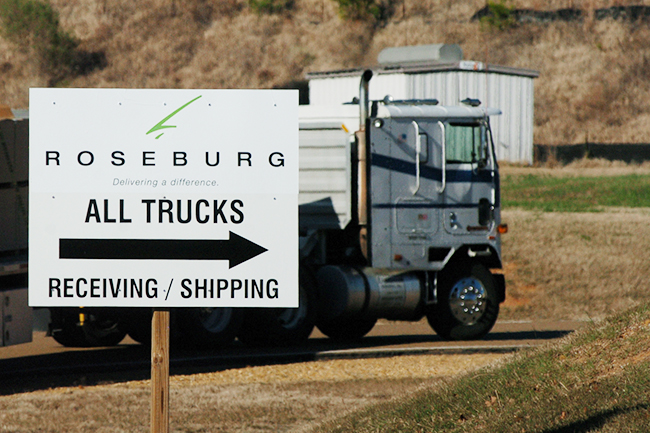 The now-closed Roseburg Forest plant will soon be reopened by a new company, bringing jobs and possibly the sound of a train whistle back to Lafayette County.

On Wednesday, Roseburg Forest Products announced the sale of its Oxford plant to Wilsonart Engineered Surfaces.

Under Roseburg, the plant produced thermally fused melamine laminates for high-end office furniture. The plant closed in December 2015 after the loss of a key customer.

The company moved to Oxford in 2006 after purchasing the former Georgia-Pacific facility on County Road 101. At its strongest, the plant employed about 145 people. Over the years, that number dropped down to 50 in 2013. By the time the decision to close the plant was made, only 22 hourly and six salary workers were employed at the wood-product manufacturing plant.

Roseburg owned the plant and the property it sits on.

“The decision to close the Oxford plant was a difficult one, so it’s great to see it come back to life as a result of this deal,” said Mark Avery, Roseburg’s Vice President of Composites Business. “The plant’s reopening will be good for that community, and hopefully some of our former employees will find work with Wilsonart.”

Jon Maynard, president and CEO of the Oxford-Lafayette County Economic Development Foundation and Chamber of Commerce, is excited about the future of the facility.

“We are pleased that Wilsonart Engineered Surfaces has purchased the Roseburg facility in Oxford,” Maynard said in a statement.  “When Roseburg shut down in 2015, they had been slowly reducing their total employment over a number of years. In conversations with their leadership, we feel that their location in Oxford, the resources that they have available locally and the size of the plant are conducive for growth.”

“The Oxford facility is a logical extension of Wilsonart’s state-of-the-art manufacturing operations in North America, and will provide our customers greater access to the best-matched TFL Panels that are part of Wilsonart’s Coordinated Surfaces program,” said Ron Ubertini, Wilsonart vice president, product management. “Our customers expect a range of decorative surfaces that offer beautiful design and performance according to a project’s needs. Expanding our manufacturing footprint enables us to improve service and meet the growing demand for this product.”

“We continue to work to fill jobs and bring industry to this town and I think Wilsonart fits Oxford and Lafayette County,” Busby said. “I think they have potential to be a big player in this area.”

To ship its heavy, wood product, Roseburg used freight trains to transport material. It was the only industry in Lafayette County that still used the railroad to transport goods until it shut down in 2015. Since then, the railroad tracks have been silent.

The rails are operated by the Mississippi Central Railroad Co., a subsidiary of Pioneer Railcorp, that operates on 51 miles of track from Oxford to Grand Junction, Tennessee; 11 miles in Iuka and 46 miles from Corinth to Red Bay, Alabama.

Tammy Weadock, public relations manager for Wilsonart said it is possible the company may use freight trains at the Oxford plant in the future.

“We expect to use the rail service system,” she said in an email to the EAGLE. “But we’ll know more once the facility is up and running.”

Representatives from the Mississippi Central Railroad Co. could not be reached for comment Wednesday.