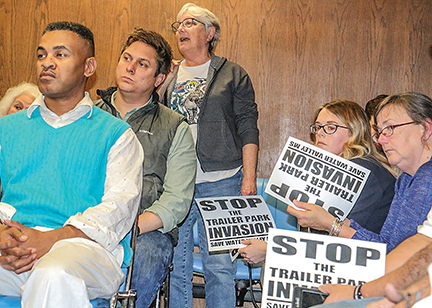 North Mississippi Herald Residents with signs in opposition to a proposed expansion of a trailer park listen during a meeting in Water Valley Tuesday night. 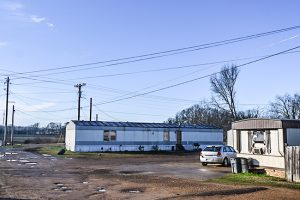 Bruce Newman
A mobile home park in Water Valley has caused a stir in the community since a group of Oxford developers purchased it and plan to expand the complex on an additional 20 acres near downtown.

A proposed trailer park expansion in Water Valley may have hit a snag after city officials reported at Tuesday night’s meeting that the city does not have the capacity to provide sewage for the entire project.

In response to questions from multiple attendees in a packed board room, Mayor Larry Hart explained the city will provide water, sewage and electricity for the portion of property located inside the city limits, which could accommodate eight to 10 additional mobile homes in the trailer park that is already home to 12 mobile homes.

“At this time we do not want to expand the city’s utility system into the county for a project of this size. We are going to operate within the city limits,” Hart stressed, adding that any extra sewage capacity in the town’s wastewater treatment facility would be reserved for future growth inside the city.

Over two-thirds of the 29.5-acre tract of property purchased last year for the proposed development by four Oxford men — Turner Barnes, Andrew Ross, Hayden Alexander and Josh Matthews – is outside the city limits. The property is located just south of the town’s historic Blount-McLarty neighborhood.

Hart also said Tuesday that the portion of property inside the city zoned R-4 or special residential that permits mobile home parks, is actually a little less than four acres.  City Attorney John Crow added that guidelines for development in R-4 property is very restrictive.

“The streets have to be paved, the manufactured houses must be under-girded, it’s got to be landscaped, it has got to be sodded. You can’t just start stacking them in there,” Crow explained.

“We will enforce that ordinance,” Hart also added, in response to questions about enforcement.

Hart outlined the protocol for the development, explaining that a proposal would first be submitted to the city’s planning commissioners.

“As of this moment, there is no permit in front of the city for anything. The permit application starts the ball to rolling,” Hart explained. The mayor added that a consulting engineer had contacted the city on behalf of the developers inquiring about sewage capacity.

Last month the developers told the Herald that they were still in the planning phase and did not speculate about the total number of mobile homes the project would encompass. The group also stressed their goal was to create an affordable, yet safe and family oriented community and they planned to purchase new mobile homes for the expansion.

The issue has created controversy in town, with multiple residents citing that close to 100 units could be included in the development at maximum capacity.

“We may need to consider some future planning,” Board President Cayce Washington noted during the discussion. “Where something like this has to flow through this board before someone can go out there and do this,” he  added. “I don’t think our target is going to be an individual homeowner, it is going to be more for developers,” Washington explained.

District Three Supervisor Lee McMinn also voiced support for an ordinance that would provide minimum subdivision standards for future development as well as restrictions for properties that have become a blight in the county.

“I am thinking in terms for future development and for protection of current homeowners,” McMinn said.