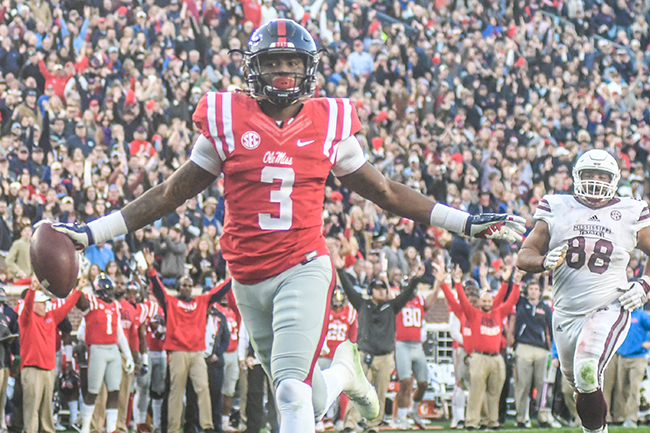 The NFL hasn’t released an official list of those who’ve been invited to the scouting combine in Indianapolis later this month, but former Ole Miss receiver Damore’ea Stringfellow won’t be among them.

Stringfellow reportedly didn’t get an invite because of a guilty plea in a criminal case he was involved in while playing for Washington, the school Stringfellow signed with out of high school. Stringfellow pleaded guilty in April 2014 to two counts of fourth-degree assault and one count of third-degree malicious mischief — all misdemeanors — stemming from an altercation with a female after the Seattle Seahawks’ Super Bowl win over the Denver Broncos on Feb. 2, 2014 that briefly left her unconscious.

A rule instituted by the NFL last year prohibits anyone with misdemeanor or felony convictions involving violence or use of a weapon, domestic violence, sexual offense and/or sexual assault from participating in the combine. Oklahoma running back Joe Mixon wasn’t invited to the combine either.

Stringfellow transferred to Ole Miss and sat out the 2014 season before starting five games in 2015 and becoming a full-time starter last season. A native of Perris, California, the 6-foot-2, 220-pound Stringfellow had 46 catches for 716 yards and six touchdowns in his final season and finished his Ole Miss career with 82 receptions for 1,219 yards and 11 scores.

NFLDraftScout.com ranks Stringfellow as the No. 34 receiver prospect eligible for this year’s draft, and his past means he’ll have to wait until Ole Miss’ Pro Day this spring to try to improve his stock.

Here's another one — Due to his prior criminal record, Ole Miss WR Demore'ea Stringfellow wasn't invited to the combine in Indy.