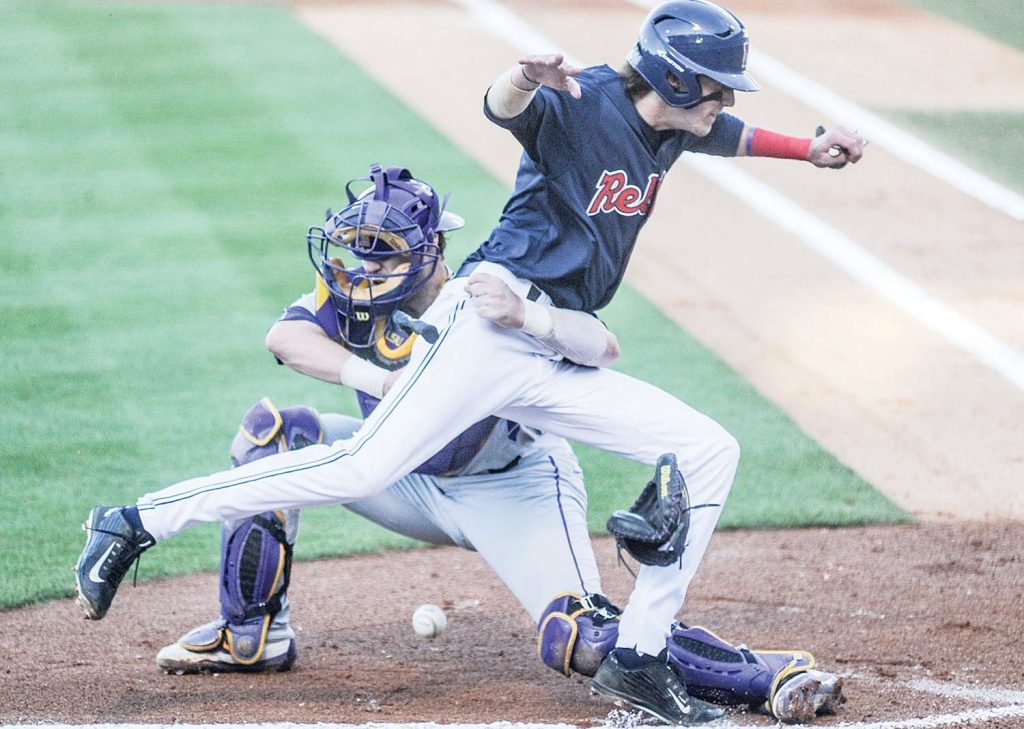 Ole Miss' Ryan Olenek (2) scores as the ball gets away from LSU catcher Jordan Romero (28) in the first inning at Oxford-University Stadium on Thursday, April 28, 2016. The Rebels won 7-6. (Bruce Newman)

Ryan Olenek is comfortable playing wherever he’s needed. For now, that’s the outfield.

Olenek will be Ole Miss’ center fielder when the Rebels open the season at Swayze Field on Feb. 17 against East Carolina, head coach Mike Bianco said. Olenek made 48 starts last season as a true freshman with 43 of those coming in the corner outfield spots.

Olenek also got three starts as the designated hitter and started a game at third base and shortstop, but he’s never gotten the nod in center. The Rebels had a void to fill with All-American J.B. Woodman moving on to the Toronto Blue Jays organization, and Bianco didn’t hesitate to fill it with one of the team’s better athletes.

“He’s just a tremendous athlete,” Bianco said. “The more of those guys you have, I think the better you are. It’s not as hard to put the puzzle together. Guys like him, (Kyle) Watson, (Will) Golsan, they’ve proven they can help us in a lot of different ways.”

Olenek committed just one error last season while his speed and range should help him carry his glovework to his new position, but replacing Woodman’s offense will be just as important. Woodman hit .323 a season ago and led the Rebels in a number of different offensive categories, including stolen bases.

Olenek hit .265 with seven extra-base hits and 28 RBIs in the bottom of the lineup last season, numbers he’s working to improve on to go with middle-of-the-order bats Tate Blackman (.322) and Colby Bortles (.269, eight home runs) and a host of talented newcomers. Olenek has tracked his own swings during fall practices and intrasquads as well as those of his teammates and believes the lineup could be more balanced than last year’s, which also lost leading hitter Henri Lartigue and shortstop Errol Robinson.

“I just feel like there’s not really any holes,” Olenek said. “You can’t really pitch around anybody in this lineup. This entire lineup just comes together, and if one guy doesn’t get the job done, the next guy will. We just pick each other up.”

Olenek’s confidence in his game going to another level starts with the weight he’s added to his 6-foot-5 frame.

He reported to campus at 150 pounds after signing with the Rebels out of Trinity Prep in Florida. After a couple of years in the Rebels’ strength program, Olenek said he’s up to 190 pounds — an increase he said is impacting every aspect of his game.

“I feel more powerful and lot stronger. Even when I run, I feel faster,” Olenek said. “When I hit, the ball just travels farther. Off the bat, it feels better. Everything is just enhanced with the weight I’ve put on.”

Olenek has also gotten reps at shortstop, though former Oxford High standout Grae Kessinger will start the season there. Olenek could play other infield positions or even pitch in a pinch.

With Olenek, there’s no shortage of options.

“Honestly I’m just comfortable at wherever they put me,” Olenek said.